Working at a Start-Up: Idiosyncrasies As Entertainment

I’m no stranger to start-up companies; I’ve had my fair share of big companies, egos, and political red tape. Working for a small company can be both challenging and rewarding. The team at Fonolo adopts a work hard and work harder philosophy. However, daily entertainment can be found in everyone’s idiosyncrasies.

Do you find yourself grappling with whether or not to work for a start-up? It’s like being in an elevator for 8 hrs with the same people – every day.  Or in Shai’s opinion – a fishbowl. Come to think of it, visuals of fish seem to pop up a lot in presentations.  I wonder if there is a subliminal message we should be aware of.

It’s important to get along with everyone and have thick skin otherwise you’re doomed. Be prepared to be laughed at, made fun of, argue, makeup, laugh, share common spaces like a kitchen and a bathroom, and adopt unconventional meetings, similar to the ‘Shai phenomenon’ (read below).

Fonolo consists of Shai, Jason, Mike, Jelly, Ninja, Omar, Chris and little old me, the only female. At my previous job, our office was made up of six women and one guy – the complete opposite. The moodiness was off the charts, everything was pink, there was constant chatter and everyone played their own music – borderline chaotic.  Fonolo has a different vibe. We’re all plugged in via headphones, you can hear a pin drop or a mouse fart and there’s no pink.  For the most part, there’s no drama, however, Shai and Jason’s relationship, spawned from their university days, breeds a comfort level similar to an old married couple. 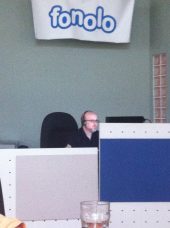 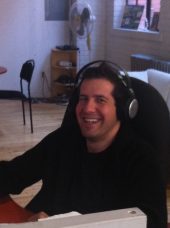 Shai’s ‘absent-mindedness’ can be entertaining as he paces the office in thought, books a meeting then walks away, walks away during a meeting (innocently, of course) but I think the biggest downside to this trait is when he deprives a fellow man of caffeine.

Offering to go on a mid-morning coffee run with only one order to remember seemed simple. Unfortunately for Jason, Shai was ‘thinking’ too aggressively on his walk to Starbucks.

Upon his return, quite happily sipping his coffee – Jason was left empty-handed and unimpressed. Openly and vocally expressing his frustration, disbelief and shock, Jason’s mid-afternoon retaliation offered some satisfaction, which was heavily sprinkled with sarcasm. Poor Shai, he’s picked on in the office and now on this blog. We know he genuinely forgot but really, it was ONE coffee.

Most big organizations discourage kitchen privileges for a myriad of reasons.  I’m no ‘Snow White’ but with seven guys, one girl and a kitchen, someone is bound to get bent out of shape.  Jason is Fonolo’s ‘mother hen’ who keeps us all in check with housekeeping – bless his soul because things could get scary.  There might be office uproar if someone blindly pours coffee down the drain without rinsing the sink with water.

Jelly and Ninja are quiet as mice and unleash any pent up energy on the foosball table.  Omar has adopted a daily, post-lunch Red Bull addiction. I can’t rat out my little birdie who feeds me the Jason/Shai ‘once upon a time’ stories. As for me? This is my blog post, so I’m perfect and show no strange, moody or unfavorable characteristics.  Maybe I’m delusional. Maybe there will be an anonymous comment. <wink>

A little birdie shared a lot more stories but my point is, we’re human and we all have our idiosyncrasies.  These are the quirky things that make life at a start-up entertaining. It’s an environment where you leave egos at the door, freely share your opinions and ideas, forgo stuffy dress codes, be yourself, and adopt flexible work hours. In exchange, you work extremely hard – but you want to – because there’s a sense of pride in being a part of something big. It’s a team atmosphere where things get done and one person’s accomplishment is a team success. We’re all working for the betterment of the company and we all have a vested interest in the overall success of Fonolo.

These are the things that make working at a startup so much fun and I wouldn’t trade these guys in for anything.  If all else fails, we have a supply of office crack.