Working at a Startup: How To Master the Art of Collaboration

Think tank. Brainstorm. Conference. Powwow. Group huddle. Call it whatever you want but our new method to rewriting our content worked like a charm.  For weeks we’ve been struggling with different ways to tackle our ‘new messaging’ project, which runs parallel with the web redesign.

Why such a struggle? Leaving the rewrite to one person didn’t work (that would be me). With key technical elements missing, it lacked substance. When left up to the engineers, it was too jargon-y.

Time invested – was it worth it? Absolutely.

The outcome: Amazing content that everyone loved (almost everyone).

What we learned: We discovered a new way of working. It’s hard for large organizations to drop what they’re doing and invest full days to brainstorm. Startups are more flexible with time. This was an excellent process for us.

Here are a few pics that captured the Fonolo team in action: 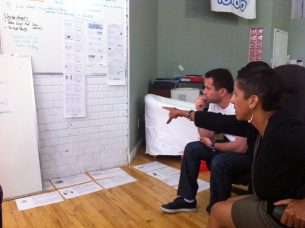 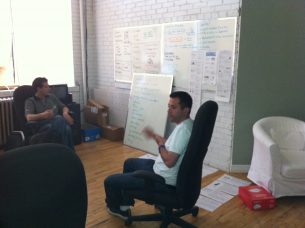 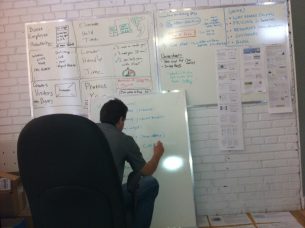 Here’s what Shai, Fonolo’s CEO had to say about the think tank session:

We wanted to come up with a new way to convey all the power of Fonolo –  in the simplest, most direct way. But, as they say, ‘simple is hard’.  After years of reusing variations of the same language, Jason and I were limited by being ‘too close’ to the topic.  Having Omar and Xania bring new perspectives to the problem was a real catalyst for new ideas.

I’m happy to announce that we’ve conquered the hardest part of our web design, decided on a design team and we’re excited to kick this thing into high gear.