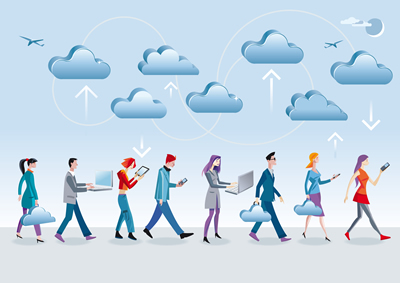 The call center experience is a universal part of modern life to the point where anyone you stop on the street can tell you about the last few (usually poor) interactions they’ve had. Most people don’t realize the impressive scale of the contact center industry. It accounts for one in every 25 jobs in the US! (Harris Interactive)

This behemoth of an industry which, for decades prior, had seen little change, is undergoing an extraordinary transformation. In the early 2000’s, running a call center through a cloud service was dismissed as impractical. A few years later, it was viewed as “just for the smallest call centers”. But by 2008 many naysayers had eaten their words and the migration was in full swing. Between 2008 and 2012, the cloud market grew by some 224%. By the end of 2013, more than 62% of organizations were using some type of cloud-based contact center solution as part of their operation. (Both data points from DMG.)

Let’s look at what is fueling that growth.

How fast is the switch happening?

For an industry of this size, the switch is happening at impressive speed.

Here’s a snapshot of cloud-vs-premise distribution based on a recent survey: 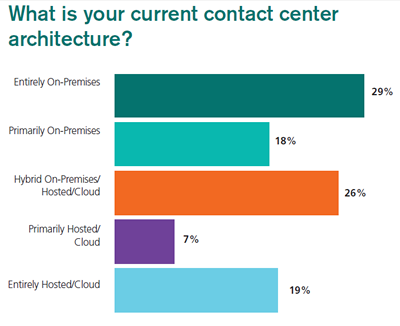 What took so long?

For many years, companies had a general reluctance to moving their call center away from the tried-and-true premise-based equipment model. Even as more and more parts of the enterprise software “pie” were being eaten by the cloud, there was a feeling that the call center is different.

Given all these concerns, it’s understandable why the call center was a “laggard” among other systems to embrace the cloud.

Building the case for a cloud call center

When a company does take the plunge and switch to cloud, what is their motivation? How is it justified internally? It’s usually a combination of factors. A good list of those factors comes to us from analyst Aphrodite Brinsmead (one of our “Top Analysts” covering call centers. See all of them here.)

There’s more detail on each of those bullet points here: Why Enterprises Are Moving Contact Centers to the Cloud.

If you are trying to build a business case for a cloud-based contact center, a great resource is this whitepaper from DMG (registration required). It walks through the details including tables with cash flow analysis.

The first generation of cloud-based call centers were built by repurposing traditional premise-based software and turning them into a multi-tenant cloud-served solution. For example, Echopass was built around Genesys, Five9 was built around Avaya. Interactive Intelligence (InIn) actually built its CaaS cloud offering around its own premise-based offering.

The next generation of offerings are being built from the ground-up as cloud call centers. Late last year, Aspect released ZipWire, as result of its collaborate with BrightPattern. 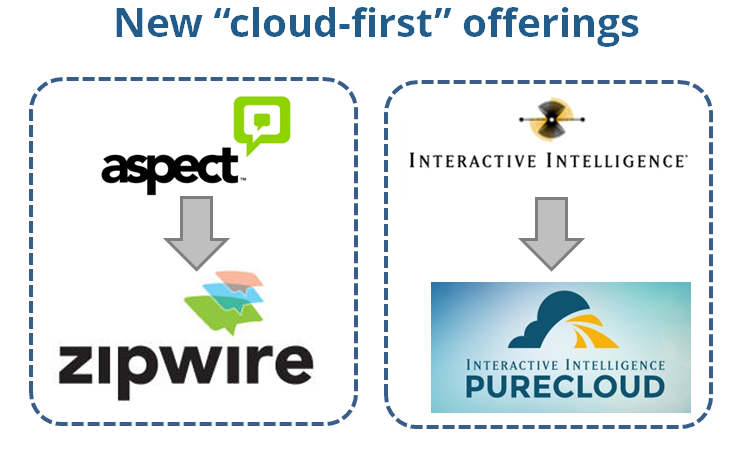 Avaya, has taken a different tack announcing a collaboration with Google to create a cloud-based offering with the somewhat cumbersome name “Customer Engagement OnAvaya Powered by Google Cloud Platform”.  It builds on Avaya’s success with their mid-market UC product IPOffice. It’s designed to work with Google chromebooks as the agent desktop, which means low costs and easy set-up.

Most recently, InIn released its PureCloud “Engage” solution. Industry analyst Keith Dawson (another member of our “Top Analyst” list) said it “extends the rapid deployment, reliability and scalability benefits of [the] PureCloud platform to give contact centers … sophisticated multi-channel applications.” Some were surprised that PureCloud itself is built on another company’s cloud platform: Amazon Web Services. For insight into that bold decision, read this in-depth interview with their CEO.

Carriers as a sales channel

Growth is further fueled by the increasing role played by carriers. They’ve been facing pressure to find high margin lines of business as the prices for basic telco services continue drop, OTT options take away lucrative SMS revenue, and regulators clamp down on aggressive consumer contracts. As a result, carriers are looking to “move up the value chain” with business services like PBX, back-up, and call center, all provided as a cloud-service. I wrote about that last year in this post.

As cloud offerings mature, we are seeing some diversity around exactly what it means to be cloud. Beth Shultz of NoJitter recently covered the phenomenon of “hybrid” cloud deployments, where a vendor delivers a combination of a cloud-based service with on-premise equipment. (We at Fonolo are huge fans of this model, by the way, and it’s how we deliver our call-back solution in cases where companies want to keep voice traffic local.)

That post quotes analyst Sheila McGee-Smith (another one of our “Top Analyst“):

There’s growing acknowledgement that we can mix and match the best elements of public and private clouds… Today I think the growing notion of hybrid means I can have a mixed environment within an application…I can have a contact center application where 80% of that is premises-based, but there are elements that I choose to deploy in the cloud.

For many years, call center lagged behind other parts of enterprise IT in embracing the cloud. But now it’s making up for lost time! It’s a safe bet that cloud deployments will continue to grow in number and size throughout the industry. One day, an on-premise call center may seem as quaint as a rotary-dial telephone. 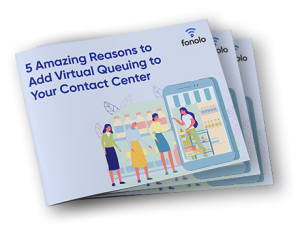