For decades, the phone call was the dominant choice for getting customer service from a company (at least, if you couldn’t walk in their door). The emergence of email, and then the web, started to change the role of the phone call. That change accelerated dramatically in recent years as new channels appeared in rapid succession: Twitter, Facebook, online chat, mobile apps, SMS.

To get a sense of the pace, take a look at SMS. A recent study by Harris showed that 64% of consumers would rather text a company than call in. That’s a big demand for a channel that wasn’t even on the radar for most consumers 5 years ago!

So where does this leave the good ‘ole phone call? Is it going to start a graceful decline in popularity and importance? Not so fast!

Reality check: Phone calls are still the dominant channel for customer service. When ContactBabel surveyed 200 call centers, it found that 80.4% of inbound customer service interactions were over the phone. But there is a decline happening. Salesforce Research surveyed more than 1900 call center leaders who expect inbound phone calls to decrease by 9% in the next 12 to 18 months.

To understand how this relates to the new channels, take a look at the chart below from Dimension Data’s highly regarded Global Contact Centre Benchmarking Report, which draws from a survey of 900 call center managers.

What’s feeding this decline? Part of it is the near-universal dislike of talking to a call center. In a recent survey of 2000 Americans (aged 18 to 65), 80% said calling traditional customer service phone lines is “inconvenient”.

Millennials, in particular, are leading the charge away from the phone call. A survey by Desk.com found that 34% of them would rather “get their teeth cleaned” than call a customer service line. All joking aside, younger customer perception matters a great deal because this demographic will encompass 50% of the US workforce by 2020, 75% by 2030.

How to Improve Customer Perception: A Complete Guide

That survey by Desk.com yielded the following ranking of channel preferences: 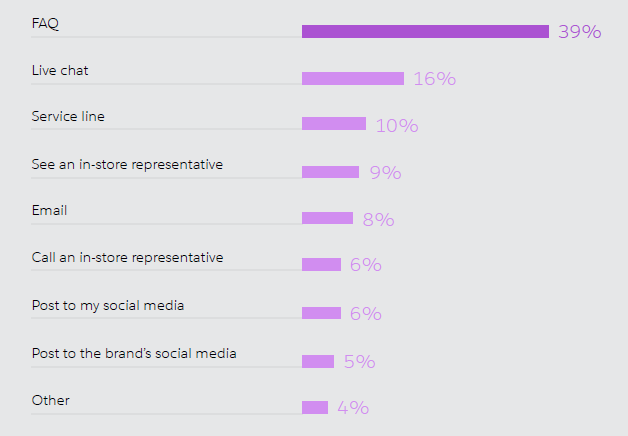 For comparison, see the chart below, from Harris Interactive Research, which shows the preferences for “Gen Y” and how they are likely to change in the near future. Voice remains dominant, although decreasing. Both voice and email are giving way to increases in social media, text (SMS), and chat. 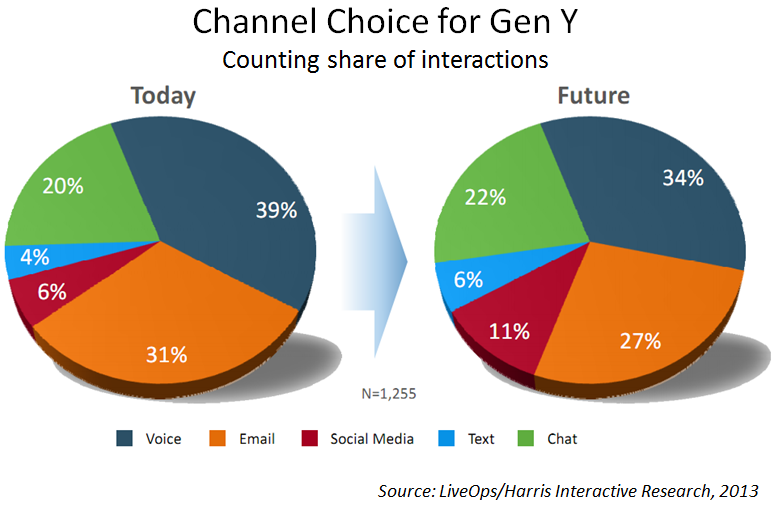 3) BUT! Phone calls still play a critical role in the mix

The quantitative decline illustrated above doesn’t tell the whole story. People dislike using the phone but still see it as the best tool for the job. We know, at an instinctive level, why a live agent conversation stands apart: When you have a tough issue to discuss; when there is an urgent matter; when self-service options have left you frustrated, we want to talk to another human to cut through it all.

What’s happening is that the rise of self-service options decreases the number of transactions that need a live conversation (as both the tools get better and consumers get more comfortable with them). But, there’s always going to be cases where self-serve tools fall short. The transactions that end up with a live agent are going to be more complicated (and hence longer) and more likely to involve an upset customer. These are precisely the “make-or-break” moments for a brand.

4) Non-voice channels are expected to increase

There is a broad consensus among call center managers that the usage of non-voice channels will continue to increase. ContactBabel surveyed 200 of them for their 2014 North American Contact Center Buyer’s Guide. The managers were asked to predict which channels would increase or decrease. 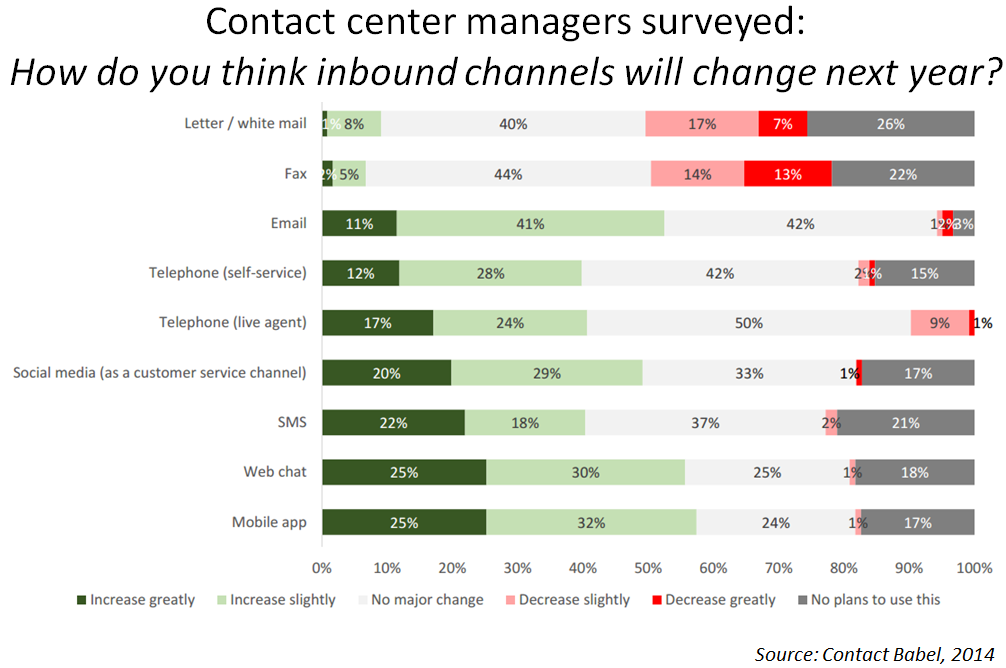 5) The phone works as a “fall-back” for failed interactions

With all the new channels growing so rapidly, many expected a steeper decline with the phone channels. As the Contact Babel survey showed, 90% of call centers are maintaining or increasing their agent headcount in the next 12 months. If other, more efficient, channels are growing, shouldn’t that translate into fewer agents?

One explanation for the discrepancy might be that a sizable number of interactions may begin on alternate channels, but escalate to a phone call for actual resolution. That kind of interaction would be “double-counted” in both columns. According to a study by Harvard Business Review, 60% of customers expect their issue to be handled on the first contact via self-service, mobile, and social media, but end-up with their issue unresolved. Then, 75% continue their interaction with a phone call.

Everyone is aware of the proliferation of channels that customers and companies use to communicate and transact business. Especially in the path-to-purchase cycle, companies are working hard to succeed as ‘omni-channel’ marketers. But it is one thing to be in a non-traditional channel (such as self-service, chat, mobile, or social media) creating awareness and engagement.  It’s quite another to be in there providing customer care.”

They produced the chart below showing the relationship between expectations and effectiveness for different channels. 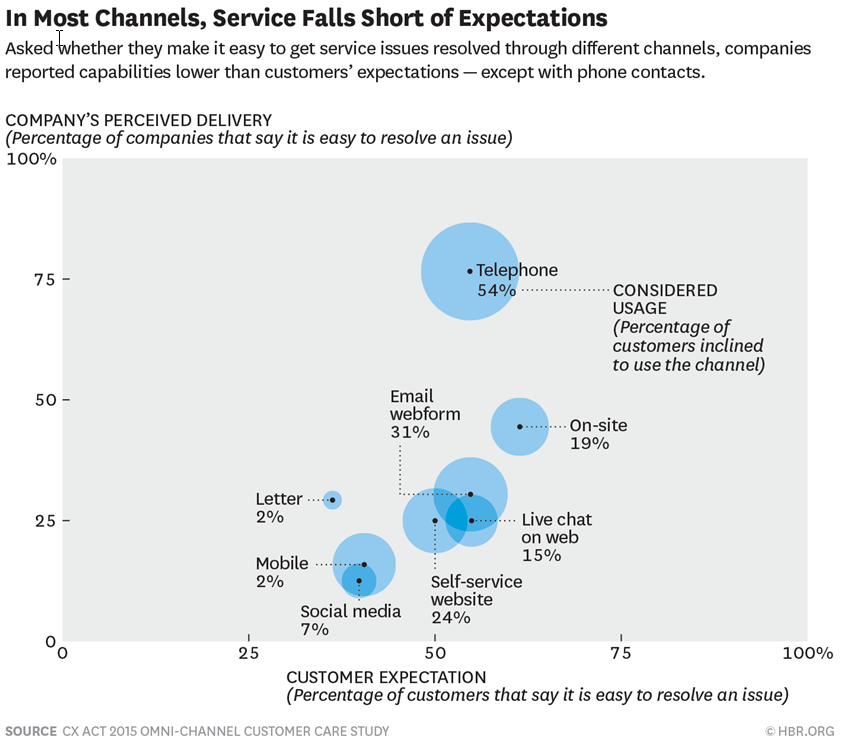 It seems clear that the phone channel will remain a central part of the customer service environment. What should companies do to maintain the quality of that channel, while keeping up in this multi-channel era? That is indeed a tough question, with no simple answer.

The best advice is to build a habit of watching your customers, competitors and leading companies for new communication channels, assessing the fit with your business, and constantly experimenting to see what works.

The upside to all this is that there has never been a more interesting time to be in this industry. We are experiencing an epic transformation in how companies interact with their customers. Be grateful for your front-row seat!