The burning questions for the customer service industry today are which channels of communication are currently most relevant, and which will be most relevant down the road. In recent months, the discussion has centered around Facebook Messenger and other messaging channels.Many people are debating whether any of these platforms (Messager, Snapchat, Kik, Line, etc) can “win” the B2C communication platform war. (See here, here or here.) The fact that WeChat has seemingly “won” China, and achieved near dominance of online customer service, adds fuel to this fire. (My take on that: Will the WeChat Model Work in the West?)

Then Facebook opened Messenger to automation, i.e. “Chatbots”, and the fire went supernova. (The role of bots in customer service is the topic of a live online discussion we’re hosting next week with a great panel of experts. Register here to join the Google Hangout.)

Lost in all this glare has been Twitter, which continues to be a powerful – and popular – channel for customers to interact with businesses. This is somewhat puzzling because, on the surface, it’s not really well-suited for this purpose. What’s the secret to Twitter’s enduring popularity as a customer service channel?

Square Peg in a Round Hole

If you asked anyone in 2008 what impact the newly hatched “micro-blogging” system would have on customer service, you would probably get blank stares. Yet here we are: 43% of the Interbrand 100 companies have dedicated twitter handles for customer service (according to SimplyMeasured).

This success has happened despite many ways in which Twitter is maladapted for customer service:

1. Defaults to a Public Channel

Twitter conversations are public by default. When you want to take your conversation private, you switch to “Direct Messages” (DM’s). But the DM system was designed with person-to-person interactions in mind, so you can only exchange DMs if you’re following the other account and vice versa. This is problematic in the customer service context and leads to awkward exchanges such as this: 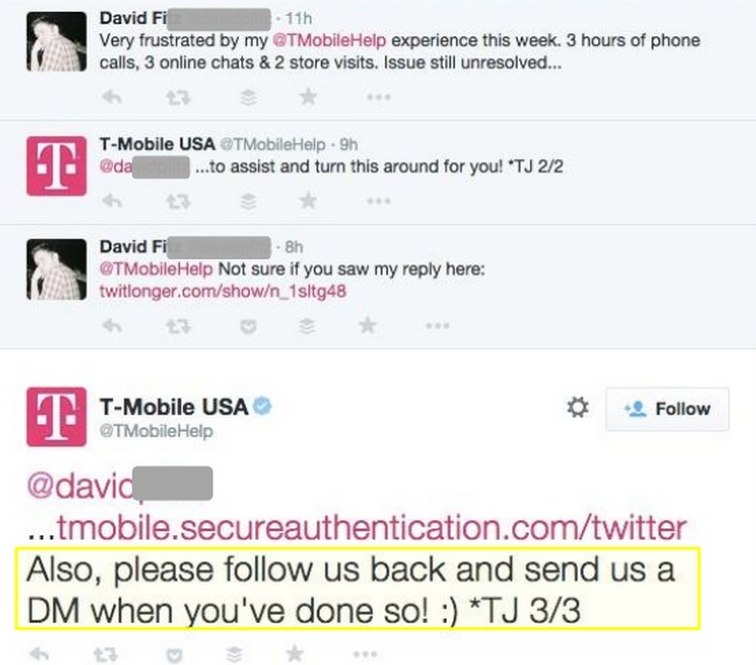 (That’s from this deck by Andrew Maher.)

It’s also unintuitive for casual users and leads to situations like this one: 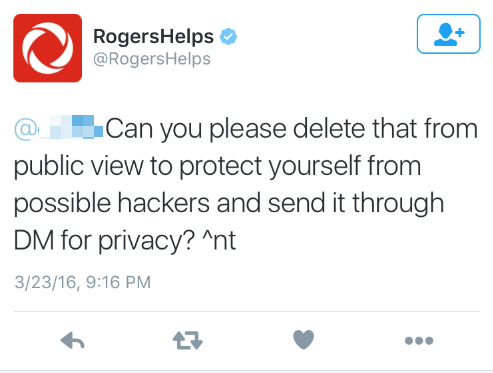 Yikes! I blurred out the users name to avoid embarrassment (and in case he/she didn’t actually delete their account number.)

Twitter conversation threads are easily fractured and mixed up. Twitter tries to connect tweets into a thread based on whether you started the tweet by clicking “Reply” and by looking at who is mentioned in the thread. But their approach isn’t perfect.

One flaw is that for large companies, many agents are sharing the same Twitter handle. Common convention is to distinguish themselves by adding their initials at the end. (Like “^nt” in the tweet above.) But this signal is ignored by Twitter.

Another flaw: If you wrote, for example, “Hey @RogersHelps, my TV died while watching the @raptors game” and Rogers replied, the thread includes the Raptors and their social media team has to decide whether it’s relevant to them or not.

A major difference between Facebook and Twitter is that the latter goes to great lengths to associate each account with a real person. In contrast, Twitter only cares about the true identity of an account for its most famous users, typically celebrities and politicians. (These accounts get the special “verified account” badge.) The vast majority of Twitter users are unauthenticated. This poses a problem for customer service, because they can’t provide much help until they establish a user’s identity.

…in my view, Twitter is a shadow of Facebook… you have to go through a song and dance to see if the person at the other end can help. There’s always a sense that social media teams are just there to comfort us or prevent a public outburst

So how does Twitter overcome all of these weaknesses? It has one card that trumps them all: Discoverability.

Consider an average consumer we’ll call Bob. He wants to communicate with a company, but doesn’t know on what channels that company is active. Bob knows some companies respond to SMS, some on Messenger, some have chat features on their website, and some are on Twitter. But Bob has limited patience for exploring all these options. If the first few don’t work, he’ll give up and just dial the phone number.

Twitter, with its public timeline, has a unique advantage. Bob doesn’t have to send a message and then wait to see if there is a reply. On Twitter, a company’s responsiveness (or lack thereof) is readily apparent. This “de-risks” Bob’s search for the right channel. One of Twitter’s weaknesses – its public nature – turns out to be a key strength.

For this reason, I predict that Twitter will remain a strong player in the customer service game for years to come.