The world of customer service is ever expanding, making it a complicated and dynamic space to navigate. With new communication channels appearing and evolving every year, it’s a challenge to understand how they relate to each other, and how they should work together. New terminology can help our thought process, if  we all agree on the meaning. Conversely, ambiguity about words like “digital” or “chat” or “call” makes the navigation harder.

In this series, we will discuss terms that are either new to the customer service space or have a recently changed meaning. We’re not going to do a simple dictionary-style listing of common terms (you can find that in many other places). We’re just tackling the stuff that is still hot out of the oven!

This is a word that I remember from decades ago in a literature class and it’s great to see it take on new life. In the customer service context, “canonical” means that an interaction is the “official” record between you and a company. I think people are also using it to imply that it is a complete record, although this is not always true.

It used to be that canonical information was kept internal to the company. Here is VC blogger Thomas Tunguz using it in that sense:

“…flyers will be able to automatically receive their itinerary, flight updates, check-in notifications, get their boarding passes, even rebook flights when needed, and communicate with the airline all from one contextual, canonical thread.” [emphasis added]

And here he is using it to contrast with email:

Bots, Messenger and the future of customer service by Michael Schneider

Facebook Messenger: inside Zuckerberg’s app for everything by Wired

Although “chat” and “messaging” are interchangeable in casual usage, they are in fact, two different approaches to customer service. 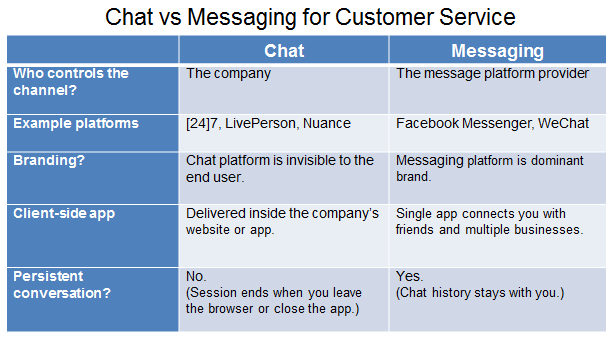 Chat vs. Messaging Comes Down to Who Owns the Channel

The Messaging Phenomenon Has Hardly Begun

This past April, Facebook announced that it was opening up its Messenger platform to automated interactions, or “bots”, and media hype went into overdrive. VentureBeat declared “The Chatbot Gold Rush is Here” and TechCrunch called it the most important launch since the App Store.

Unfortunately, “bot” is a very broad and vague term. Because examples of bot interactions focused on how people could type requests in plain language, the discussion got mashed up with the topic of AI. Predictably, the mainstream media started equating the arrival of chat bots with “HAL9000”. That unfortunate mishmash was further fueled by the fact that a true milestone in AI (a computer a final beating the world Go champion) had grabbed headlines just months before. Journalists thought they saw a pattern, and ran with it.

Here’s the cold-water: Bots are just a new delivery channel for automated self-service. The expansion of Messenger / WeChat / SnapChat / Kik / WhatsApp to include this channel is a logical, smart step forward. But it is completely independent of any progress being made in Natural Language Processing or Artificial Intelligence. This Gizmodo video lays things out well:

By the way, we recently had a great panel discussion on this topic featuring industry analysts and thought leaders. You can see the video highlights here.

This is really an “anti-entry” in the lexicon. In other words, a term we need to stop using.

A central challenge in managing customer service today is the need to decide where to put limited resources. To do that, it’s critical to know which channels are growing and which are shrinking. Industry analysts have been eager to provide information to fuel those decisions. In presenting their data, there is a natural tendency to summarize results into tidy answers.

As an example consider this chart showing the evolution of channel usage:

That chart comes from a widely cited report by Dimension Data. We’ve reference it on his blog many times, in fact. Along with that chart, the report also includes the statement that 35% of all interactions are now on “digital” channels and the bold prediction that “digital interactions will overtake voice by the end of 2016”.

But “digital” in this context is meaningless. All the channels listed – even voice – are delivered with digital technology!

How did we get into this mess? The problem has a far larger scope than just industry analysts. In common use, the word “digital” has an informal meaning of “modern” or “new” for many years. But being digital doesn’t make something new. Fax machines are digital. Heck, even Morse code is digital.

We clearly need better terminology in this area, but there are no easy answers at this point.