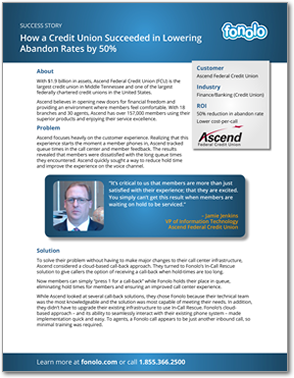 With a proud focus on their member experience, Ascend kept a keen eye on the contact center. Realizing that the experience starts the moment a member phones in, Ascend FCU watched queue times and listened closely to member feedback.

The results revealed that members were dissatisfied with long queue time. Ascend quickly sought a way to reduce hold time and improve the member experience on the voice channel.

In an effort to solve the problem, Ascend implemented Fonolo’s Voice Call-Backs. Read how this solution led to improved member satisfaction with a 50% reduction in abandon rate! Click here for the full success story.

Interested in hearing this story live? Well, you’re in luck! Jamie Jenkins, VP of Information Technology from Ascend Federal Credit Union, will be our guest speaker on today’s webinar!