Mo’ Mustaches, Mo’ Happiness: The Rise of the Movember Movement

The history of Movember began 17 short years ago when a local news channel reported that a group of men from Adelaide, Australia had coined the term “Movember” and the idea of growing moustaches for charity throughout the month of November. Since then, the idea has exploded into a month-long international event. At Fonolo, we like getting into the spirit of Movember in our own quirky way. Last year we tracked how much hold time a number of companies had accrued over the month of November and thought, “Wow, you could probably grow a moustache in that amount of time!” *Lightbulb goes off* So, if time is money, why not support Movember by giving back to the foundation based off the amount of hold time a company accumulates over the month? This year we’re asking the same of these #onholdwith offenders.

We see a lot of companies pass through the onholdwith.com top 10 list, they change from month to month, weaving in and out of many frustrated customers twitter feeds. It’s really too soon to tell who will max out their hold time for the month of November, but current statistics certainly give us a good idea of who’s on the right, excuse me, the wrong track.

Here’s who made the top 10 #onholdwith offenders list for the last two weeks: 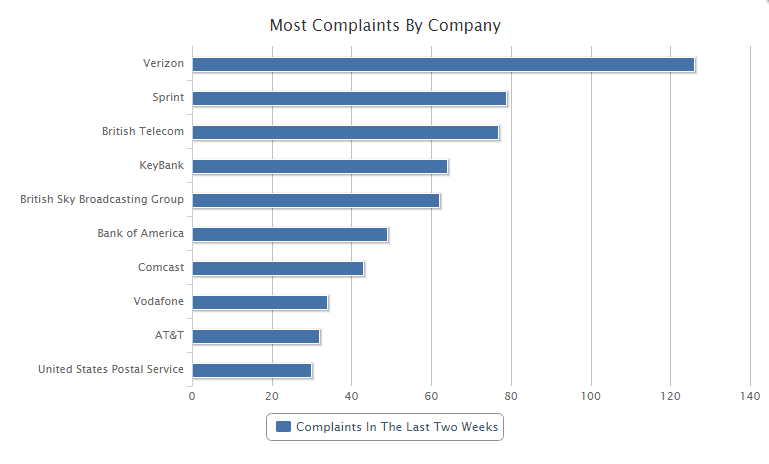 As you can see, unsurprisingly, Verizon tops the list by nearly double (the telecom industry itself takes up the top 3 spots and makes up 70% of the entire list). Notably, Verizon was recently called out by a New York Times journalist for its obnoxious hold times and dropped calls in an article called, “Love and Hate On Hold With Verizon“. If you can read it without tearing up just a bit, you’re stronger than most. But to sum it up, a widower simply wanted to disconnect her second landline now that her husband had passed. Verizon, not being the emotionally intuitive company that it should be, had this woman in hysterics by the end of the interaction. And this is only one story. Only one nationally published incident about someone trying to reach customer service – in a time of desperation no less – and failing not once, not twice but three times to find help. You know as well as we do, that there are many more stories just like this. And after reading it, there’s really no doubt that these companies should be giving back to a cause like Movember (one that helps prevent the premature death of men around the globe). Stories like this open our eyes to the weight of the customer experience, because at the end of the day, we all have things on our plate, and waiting on hold just shouldn’t be on our “to do” list.

So, how do we get companies to change their pitiful hold time ways? The #OnHoldWith hashtag is certainly one way of catching their attention. So, this Movember, if you’re stuck on hold, we ask you to challenge the company that you’re stuck waiting with to contribute to the Movember cause because life is short, and hold times shouldn’t make you miss a minute of it.