The cloud has radically transformed the call center industry. This shift, now chugging along into its second decade, has been well covered and is no longer surprising.

Imagine if someone from this industry time-traveled to 2018 from, say, 5 years ago. (Admittedly, not a great pitch for a sci-fi movie.) To him, the growing number of agent seats served from the cloud would be quite expected. But what would be unexpected is the new power centers created by that shift. Two companies, neither of which would be top-of-mind for our time traveler, have grabbed strategic territory in the new ecosystem, and they seem poised to dominate even further.

Research firm Ovum released a new edition of their great report, “Selecting a Multichannel Cloud Contact Center”. You can grab it here, sponsored by our good friends at Genesys.

There are a lot of vendors in this category today; at least 50, by my count. Ovum narrowed it down to 8 for closer analysis. Their criteria for inclusion was that the vendor must “provide multichannel customer service, meaning they offer a full voice call routing channel in the cloud with the capacity to route at least one interaction channel beyond voice…. [and] a minimum of 20,000 cloud-based agent seats globally… own their own technology; offer direct sales to end users; and host their services in their own data centers or in well-established, well-known data center provider facilities, or a combination of the two.”

This cool bubble graph summarizes their opinion on “technology” vs “execution”, with bubble size mapping to “market impact”.

One striking feature of the chart is how Genesys, now combined with Interactive Intelligence, really dominates the space. Consensus seems to be that the acquisition was a smart move. But I also know that there are still transition pains to overcome. In particular, there is tension between groups inside Genesys who feel that taking their existing technology and “cloudifying” it is a good (or even better) alternative to the incoming PureCloud technology from InIn. This is reminiscent of the “red vs. blue” conflict when Avaya bought Nortel’s call center business.

Three of the four “challengers” in the chart are built on top of the Twilio API. Here’s a version of the chart that I re-colored to reflect that fact. 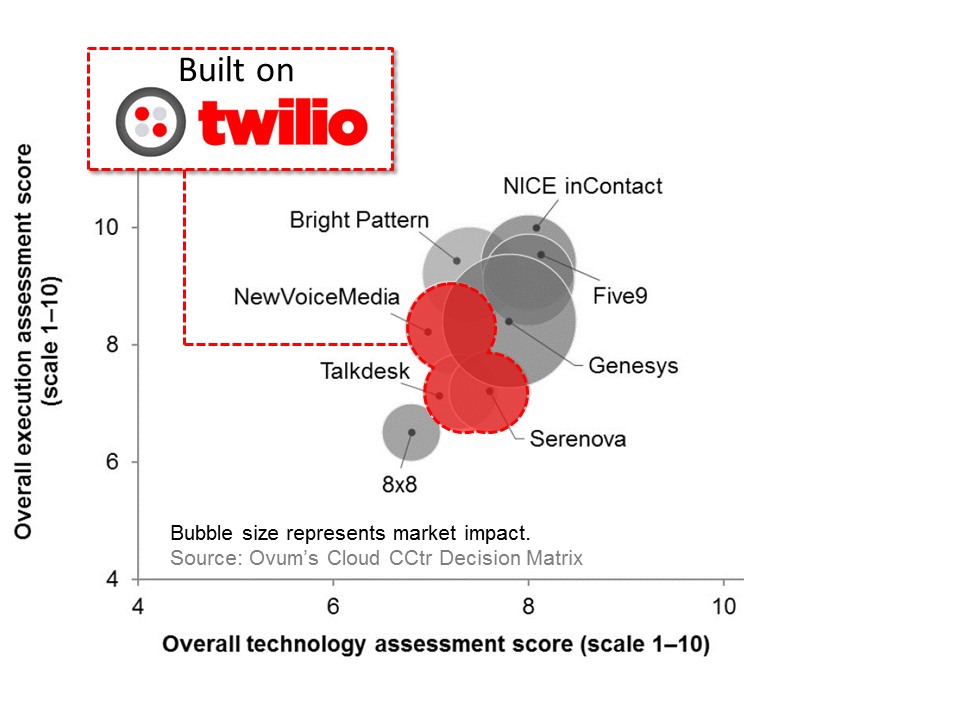 Keep in mind that Twilio is itself selling call center services. Global bank ING used Twilio to replace a legacy Avaya call center. (Watch this video at 9:30 for more: https://www.youtube.com/watch?v=VsP64iymMdE.) In doing so, Twilio flirts with “competing with its customers”.

Amazon Web Services (AWS) has quietly become the “operating system” for a huge and growing segment of the call center world. As the cloud shift continues, and as AWS remains the dominant way to “do cloud”, we can expect this to continue. So how much of that Ovum matrix is on AWS? 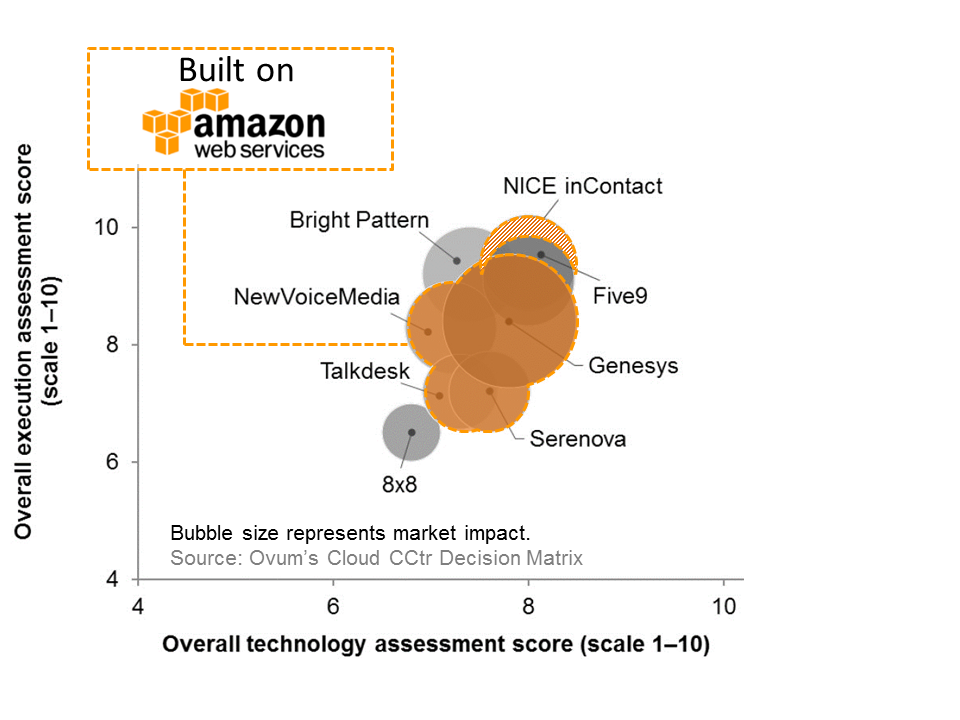 Not shown in this diagram is that even Avaya (the #1 or #2 largest call center vendor by revenue) is planning to run its new cloud offering (Oceana) on Amazon.

Now consider the significance of this diagram in light of the fact that Amazon is now offering its own call center platform, Connect, which competes directly with all these other platforms. (By the way, if you think that selling call center service is strangely peripheral to Amazon’s core business, read Why Amazon is Eating the World by @zackkanter.)

The two diagrams above show the growing power of two “centers of gravity”. What will be the power dynamic between Twilio and Amazon?

An episode in September of last year is illustrative: When news broke that Amazon would be rolling out “Amazon Global SMS” to compete directly with “Twilio Programmable SMS”, Twilio stock dropped rapidly. It recovered quickly when Twilio’s CEO reassured the world that they were still “helping to power” AWS, but the message was ominious. Read more here.

Twilio has made it no secret that they are targeting the legacy call center vendors. A page on their website is dedicated specifically to wooing Avaya call center customers…

“You may feel tied down to your Avaya legacy backend for now… but you can still continue to move forward… Instead of operating by the rules of a legacy communications vendor struggling with bankruptcy and debt problems, start augmenting your systems with Twilio’s APIs. There are a ton of improved customer experiences to be gained… Since you only pay for what you use, there’s nothing for you to risk. Any costs you incur with Twilio will be a fraction of the expenditures spent in Avaya or another legacy system.”

Some questions to ponder