What if Customer Service Worked Like the App Store?

Apple’s new Business Chat could have a huge impact on customer service by changing the balance of forces between consumers and companies.

We all know what good customer service should look like, and the people on the “inside” know it just as well as you do. Those folks – from the CIO down to the floor-level call center manager – are consumers too, after all; but the pressure of short-term goals leads them astray.

For example, they know that hiring more agents will shorten hold times. But that extra cost is obvious and immediate, whereas the damage from frustrated customers is gradual and hard to measure.

Consumer complaints can exert pressure, but it is diffuse. There’s no enforcement mechanism. There’s no sheriff in town. I believe Apple is aiming to change that situation with Business Chat.

Remember what software was like before the App Store? I’m not talking the big shrink-wrap delivered productivity suites, I’m talking about the universe of shareware and freeware. For any genre, there were dozens of competing products, but wading through it all was a huge chore.  There was no mechanism to enforce standards, to weed out junk, or to empower collective user feedback. Both the publishers and the users of software suffered as a result. Apple’s App Store (followed by Google’s and Microsoft’s versions) fixed all of that. In summary: We accepted an all-powerful gatekeeper in exchange for getting a thriving ecosystem of software.

What does this have to do with customer service? Well, like the software world in its pre-App store days, we don’t have an efficient mechanism today for complaints about customer service to impact a company. If there is a really egregious offense (breaking a guitar, killing a pet, etc.) then it cuts through the noise and gets a few news cycles. But, for the regular day-to-day annoyances, there isn’t a corrective force really exerted on the company.

Think of the companies who are the exemplars of customer service: Zappos, Virgin Airlines, etc. What’s the x-factor? They usual have a founder at the helm who is passionate about customer service. What that indicates is that normal industry forces don’t optimize for customer service. It takes an exogenous force – the maverick founder, unbeholden to short-termism – to make that happen.

To fix that, we need a system that:

I suspect this is the vision Apple has for Business Chat. 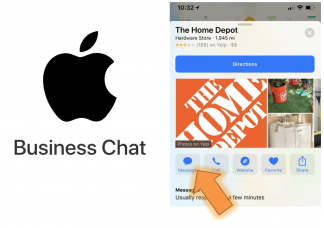 How Apple Can Change the Game

Apple wants iMessage to be your new channel for interacting with businesses. (See TechCrunch for the basics.) They are not the first or only tech company hoping to grab this valuable piece of territory, but they have unique strengths. (See Apple’s Business Chat Has a Golden Moment to Dominate Customer Service).

A big part of their pitch is that your Apple credentials can be used to identify yourself with the company you’re chatting with. This is a convenience for the consumer (eliminating one of the frustrations of a typical call center interaction), as well as a privacy salve. But note also the power this gives Apple. As a company grows to rely on Business Chat as the customer service process that power grows. The adoption of Apple Pay, another key part of their pitch, increases this leverage too.

What will Apple do with this power? Apple’s page for Business Chat has some clues for us:

Regarding bots:
“… your conversations will be with a live agent. You might get a fast, automated response for simple requests, but a real person will be available if needed.”

Regarding outreach:
“…the company can’t contact you again until you start another conversation…”

Notice the wording here. These are declarative statements about business processes in other companies. How strictly will Apple enforce these rules? What will the penalties be? When they say “a real person will be available…” does that mean under all cases? How much wait time is acceptable?

App Store is Already Part of the Picture 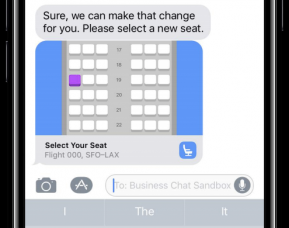 Once we’re in the realm of App Store, then we already have a powerful and trusted system for user recommendations. Will Apple allow users to rate the service offered through these Business Chat apps? If so, we may finally have a solution to the incentives problems mentioned at the beginning of this post. That is, we can close the feedback loop by giving companies effective and fast-acting mechanism for companies to the see impact – positive and negative – of decisions regarding customer service.

This isn’t the first attempt at aggregating feedback on customer service. For a while, I thought that Twitter would serve this function by making consumer complaints public and searchable, but that hasn’t happened. The site GetHuman has been around for over a decade, but its impact has been minimal. We at Fonolo have a similar effort in progress at our OnHoldWith side project (a live feed of tweeted complaints regarding long hold time). In all these cases, there’s simply no substantial consequence for a low ranking.

What are You Smoking?

Admittedly, much of this is speculation – Apple hasn’t said anything about enforcement, standards, or user ratings. It may be that Business Chat is just intended to boost iMessage usage which, in turn, should sell more iPhones. Maybe I’m letting my imagination get ahead of the facts.

But consider: It’s safe to believe that Apple wants its devices to serve as gateways to better conversations with companies. Dealing with large companies is one of those dreaded chores of adult life. If Apple can remove some of that frustration, they will increase affinity of their users.

Apple surely recognizes that one can’t reach that goal with technology alone. The tricky part is changing the behavior of the organizations on the other side of the equation. Apple has the two mechanisms described above at its disposal: enforcement of minimum standards and pressure from aggregated user reviews. Let’s see what they do. 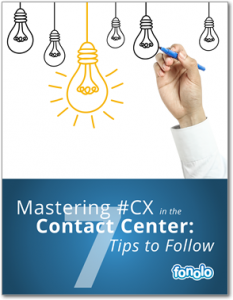 Using these seven tips, we can creatively turn your contact center into a haven for great customer experiences.