In May, Cisco acquired Accompany for $270 million in cash and assets. The core value of Accompany is its AI-driven “relationship intelligence platform”. This is on the smallish size for Cisco, but it was the timing of the deal that made it so interesting. They announced it immediately after losing super-star executive Rowan Trollope. He was leading their collaboration business (which includes call center). Accompany’s CEO, Amy Chang, who is also on Cisco’s board, will be taking on that role. (Trollope left to become Five9’s CEO.)

Genesys is continuing a strong acquisition streak: 16 companies in the last 6 years. In February, it acquired Altocloud which provides a cloud-based customer journey analytics package. Genesys is continuing an aggressive pivot to cloud, kicked off by last year’s acquisition of Interactive Intelligence. (Altocloud claims that “AI and machine learning” are involved in the product, but I’m skeptical. I’m not knocking the product… it might be awesome whether or not there is bona fide AI.

NICE made a major move in the call center space in 2016 by buying InContact. They followed up in April with an acquisition of Mattersight which provides SaaS-based enterprise behavioral analytics software. As I mentioned in the intro, the analytics piece is becoming a crucial battleground in this space. Barak Eilam, CEO, NICE, said: “Analytics is the cornerstone of NICE’s strategy of creating a new customer service paradigm…” One concern is whether new privacy regulations (like GDPR) and new attitudes towards personal tracking are going to rain on this parade.

This is another deal with AI and machine learning at the center. This may have been primarily about the team. Dejan Deklich, Chief Product Officer at 8×8 said, “we are thrilled to add top-notch AI talent to strengthen 8×8’s market leadership…”. So this deal is really an indication of how desirable AI talent is to vendors right now. The question is, will we see the fruits of all this investment in AI, a few years down the road?

Dialpad spent $50M (reportedly) to acquire TalkIQ, a speech analytics company. The goal is to add real-time transcription, automated call summaries and sentiment analysis to Dialpad’s UC and call center offerings. CEO Craig Walker said TalkIQ was attractive because “…many [other] startups in [this] category, for voice capabilities were simply repackaging Google’s speech API…” It’s true that most companies are using 3rd party ASR, though it’s usually Nuance’s (e.g. CallMiner & Tethr), not Google’s. But it’s understandable that Walker would name-drop Google given that he used to work there and GV invested in Dialpad. 😉 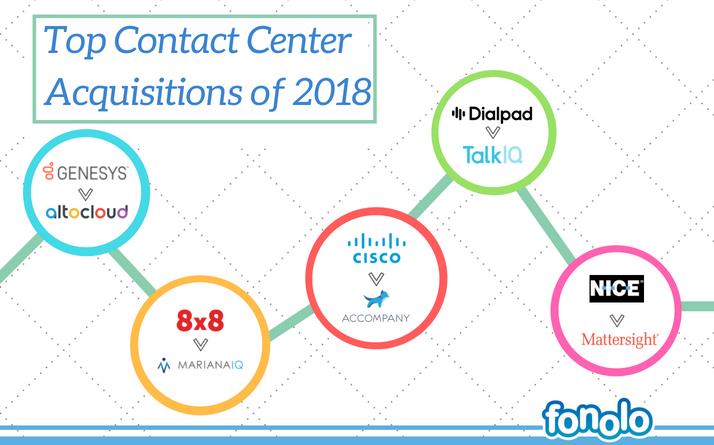