You know when you’re listening to a podcast interview and the guest says something and you literally smack your head, pause the podcast, and start tweeting? Happened to me last week.

Andrew Yang, founder of “Venture for America” (and a long-shot candidate for president in 2020) said, “Google recently demonstrated software that can do the job of an average call center worker … that’s going to result in hundreds of thousands of jobs lost”.

Now, I grant some leniency for people outside our industry not getting some details right. But this thought is so wrong — and, sadly, growing in popularity — that it really needs correcting.

Are the Robots Going to Take All the Jobs?

Mr. Yang was taking up the very important issue of long-term structural unemployment in the face of growing automation. It’s not an easy topic because there are many ways to look at economic data, especially from a country as large and diverse as the United States. Furthermore, it’s hard to separate out the effects from an aging population, globalization and automation. (Those last two forces are particularly intertwined in the call center space, as call center jobs are among the easiest to offshore.) That big picture question is outside my expertise, but I can speak to the present and near-term situation in the call center industry.

Duplex is Not About Agent Replacement

To be fair to Mr. Yang, here is his full quote about call centers, starting at 11:20:

Let’s take this apart. In the first sentence, I assume he’s referring to Google Duplex. That now-famous demonstration where the Duplex bot called a hair salon to book an appointment was definitely eye-opening, but these kinds of SMB transactions are not handled by call centers. So, there is no direct impact – at least via this use case – on the call center world. We addressed this on the blog: No, Google’s Duplex is Not Going to Replace Call Centers.

Agent is Not a Single Job Description

Still, maybe Duplex was not the right product to illustrate the point. What about the broader issue of AI catching up with the job of call center agent? Well, it’s meaningless to talk about anything “replacing a call center agent” because that’s not a specific job (like, say, a shoemaker). An agent could be a bank teller, a nurse, or a computer technician. They just happen to be doing their job while interacting remotely, rather than in person.

(I’ve heard a similar argument about truck-drivers – another constituency cited as on the brink of robo-pocalypse –namely that being a truck driver entails much more than driving a truck.)

We Don’t See it in the Data

Let’s look at the Bureau of Labor Statistics. They show employment of “Customer Service Representatives” consistently growing over the last few years. 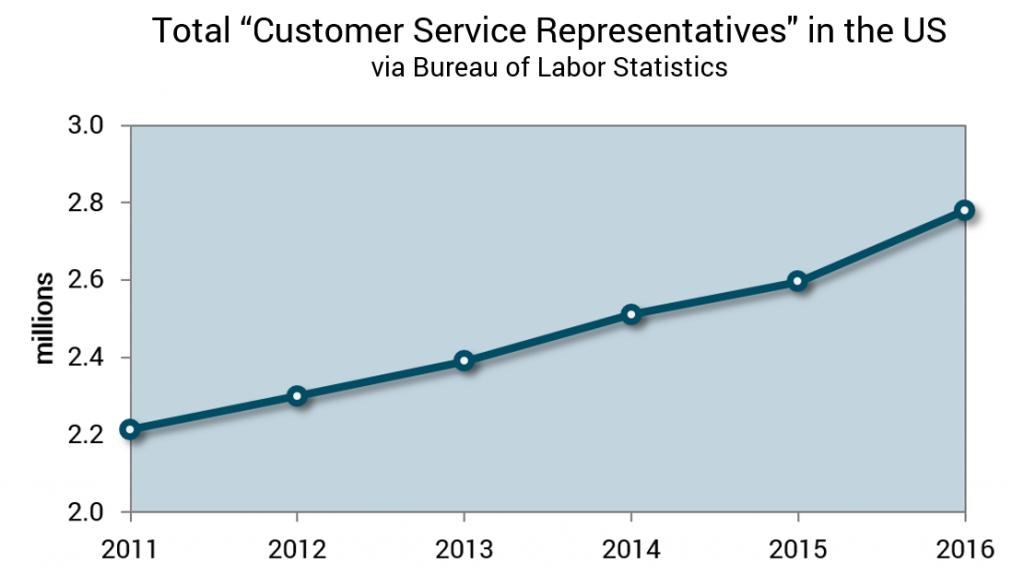 (Yes, looking at this data does step on my own point from the previous paragraph, namely that someone working via call center as, say, a nurse, should be counted under occupation “nurse” and not appear in that chart at all.)

My best guess as to why we see agent employment increasing: The universe of transactions that we do remotely keeps expanding (displacing in-person interactions), and this outweighs any contraction we get from automation.

More on that here: Nobody Knows if Voice Is Growing or Shrinking.

How do we reconcile this with all the progress we see in NLP, AI and voice recognition? What about Siri, Alexa and Cortana? What about the massive adoption of chat and the flurry of interest in chatbots? Surely that must all be having some impact, no?

Yes, but not how people think it does. What’s happening is that the ways customers and companies interact is changing. Self-service is getting better, less error-prone and more popular. For example, phone-based IVR gets replaced by text-based chatbots. But there seems to be a ceiling to how much we can automate. Every business has a long-tail of interactions that are too rare, or too volatile, to be worth adapting into self-serve. More here: What’s the Ceiling on Self-Service?

Maybe today you book your flight via mobile app, maybe next year via Siri, but that’s replacing what you would’ve done via an online form, so this progress is not chipping away at the agent’s role. In many businesses, we’ve reached a kind of “steady-state” of what is on the self-serve side of the fence, versus what requires an agent. When the realm of self-service does expand, it takes routine interactions away from agents, but leaves them with the more complicated – and time-consuming – interactions. More here: How to Think about Chatbots in a Big Picture Kinda Way.

Back to the Economic Big Picture

For those fretting over the ongoing decline in labor force participation, especially outside urban centers, what’s happening in customer service should actually be encouraging. The key is, don’t think about this as a “call center” story. More human-to-human jobs can be done remotely due to 1) technology improvements; and 2) the willingness of consumers to interact that way. Some of those remote workers might work from a building that looks like a call center. But many will not. Combine the “more jobs can be remote” with the “self-service ceiling” effect, and this is a force for not just maintaining employment, but bringing opportunity to regions that need it most.

I’m going to bring my curmudgeonly views to a great panel discussion on September 27th. Register for “The Impact of AI in Customer Experience” here. Thanks to our terrific local contact center industry group (GTACC) for organizing!