What Does it Mean for Commerce to be Conversational?

I just returned from the excellent Conversational Commerce Conference. It’s not a big event (just one track over two days), but it is very focused. I heard two excellent success stories on recent bot deployments. I think I need to revise downward my bot-skepticism a bit.

The highlight for me was a fireside chat with Dan Miller, Mitch Lieberman and Chris Messina over what exactly is meant by saying something is “conversational”. It’s a term with multiple meanings, all of which are central to the future of commerce, customer service and, more broadly, how people and companies are going to interact in the future.

Dan and Mitch are with Opus Research, which organized the conference. Chris is a prolific and influential technologist (most know him as the inventor of the hashtag). Chris popularized the term “conversational commerce” in a widely-read blog post a few years ago, so some say he “coined” the phrase. However, Dan launched the conference that bears that name a few years prior – so, both have some claim to that mantle. (I thought they should arm wrestle for the title, but they were quite civil about it.)

As it turns out, they both mean very different things when they use that term. At the end of the session, the heuristic concept that popped into my mind was “micro vs macro”.

Dan Miller (and most of the other presenters at the conference) are focused on “conversational” as a style of transaction. By that they mean using turn-by-turn interactions, in near real-time, with a human or bot, to get something done.

This is in contrast with, say, filling out a form and hitting submit; using a search function to find information; or sending an e-mail and waiting for the response.

A big part of the excitement in this realm is the rapid technical improvement in NLP/NLU, ASR and AI. As Dan put it: “We’re redefining the self-serve process … We can now use our own words to describe what we want …”

Chris Messina is thinking about the bigger picture. From my handwritten notes:

“Can you add value over time rather than ‘How do I end this conversation as quickly as possible?’ … Thinking ten years out … how are brands going to show up in your life in a way that is mutually beneficial?”

To him, the word “conversational” refers to building a relationship over time, especially at times when there isn’t an immediate goal. 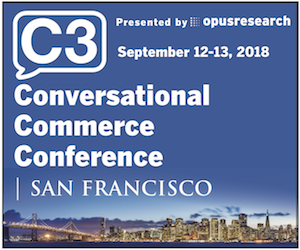 Regarding the macro conversational concept, someone from the audience asked (paraphrased): “How do we reconcile that with the fact that, when we contact a company, it’s because we need to get something done? Agents aren’t paid to chit-chat and as a customer I don’t want it to take any longer than it needs to.” Chris’s answer was that “we need to connect these micro-moments [and] … get to my intention … without dehumanizing.” That’s a tall order for sure, but a worthwhile goal.

It occurred to me that the other big difference between conversations with a business and conversations with a friend is that every time you talk to a business there’s a different person at the other end, so you’re never going to build a relationship. This is partly why companies give their bots cutesy names: Lexy, Ava, Julie, Margot, Bixbi, etc. Of course, today, we all know this is a thin veneer: There’s no real personality there. But maybe, one day, we’ll get to a point where the bots remember you and there really is a persistent, human-like, relationship there.

Brands are already doing this today via their social media outreach. See for example this post in the Atlantic.

Now almost every brand is a #brand too. Spend enough time perusing corporations’ social accounts, and you’ll start to see distinct personas emerge: Wendy’s is catty; Arby’s is geeky; Charmin is, well, cheeky. This shift has ushered in a whole new job category. Companies employ social-media managers and online-content specialists to trawl Facebook, Twitter, Instagram, and other platforms, looking for opportunities to engage—a favorite word of online advertisers—or in my case, to send pizza.

Here, the social media teams are trying to act as a single hive mind, with a unified personality, but doing the outreach one-by-one to influencers on social media. The question is, can this be scaled up to cover all customers through some combination of coordinated human and AI work?

Imagine the bot at your insurance company really being able to make personalized small talk – remembering that you like hockey for example – and put you at ease. That’s still far in the future, but it’s worth thinking about what the implications are. We’re not talking about passing the Turing test or being sentient. The bar is much lower: If I had even a small affinity for the insurance company’s bot, might it raise my loyalty enough that I’ll tolerate a slightly higher bill?