Who Will Control the Customer Service Messaging Channel?

Text or talk? Voice conversations are still critical, but data shows that the former is becoming a bigger part of customer service interactions. This trend is driven partly by consumer preferences and partly by companies striving to lower costs. Companies are also leaning towards text because of the promise of increased automation, which is easier to do once a conversation has shifted to text.

To facilitate text conversations, you also have to ask the question: “Which channel?” There is SMS, of course. And then there are the big messaging platforms: Messenger and WhatsApp (both from Facebook), Apple’s Business Chat, and Google’s offering called (for now) Google My Business Chat. Among those platforms, a big battle is raging.

Facebook, Apple, and Google each control a channel (or channels) of communication used by a significant portion of the population. Apple does this through iMessage on Macs, iPhones, and iPads; Google through Android; and Facebook through its social networks. (Internationally the dynamic is different, but in North America, they are the only ones with the power to change the game.)

Each has the same goal: to dominate business-to-consumer communication, but since they are coming at it from different directions, they can’t use the same strategy. 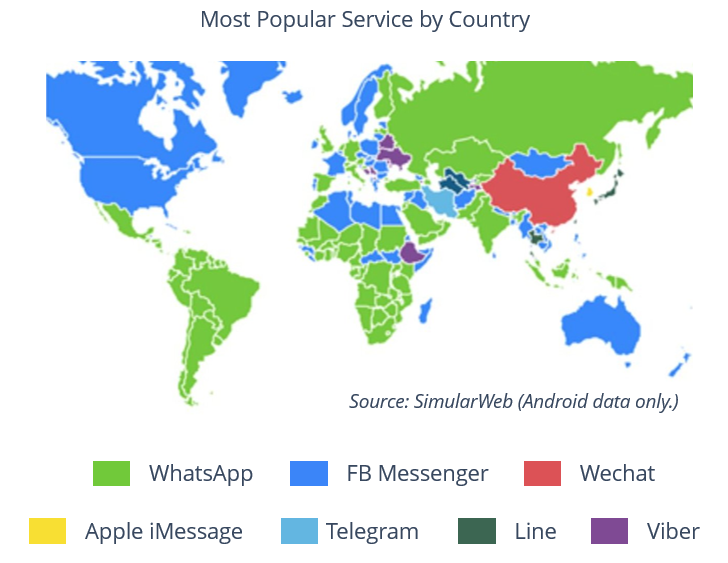 It’s possible none of the three will win. Good ole’ SMS – now 20+ years old – still has a distinct advantage in at least one dimension: deliverability. For more, see “Amid Messaging Channel Jungle, SMS Stands Alone.”

SMS has been somewhat hindered by the fact that there are unclear (and unevenly enforced) rules around how business-to-consumer messages can be sent (vs. consumer-to-consumer). Carriers played a somewhat conflicted role in enforcing these rules but also urging companies to move to short codes (which gave carriers more revenue). Now the new “10DLC” initiative is seeking to simplify the landscape.

RCS is the successor to SMS that promises to bring it on par with the more modern messaging channels via increased character limits, read receipts, and media types (like photos and videos). RCS was created by the carriers, but floundered for years. It was rumored that Apple was going to support it. But now Google is its main benefactor.

For now, the results are not great: With the Pixel 3A, T-Mobile just proved how broken the RCS Chat rollout has become. The author of that piece, Dieter Bohm, states: “It’s very difficult to accurately convey all the technical nuances behind whether, why, and how carriers do or do not support the Universal Profile for RCS. A carrier could support RCS but not the Universal Profile. A carrier could support RCS but apparently not be fully hooked up to the interconnect that makes it work with other carriers.”

Facebook has had several years of bad press around privacy and questionable business practices. That has surely been a factor in the slow adoption of Facebook’s “Messenger for Business” program. WhatsApp is doing better in this sense, evidenced by Zendesk’s acquisition of Smooch last month. We covered that here: “Acquisitions Point to Messaging’s Future in Customer Service.”

In March, Facebook’s CEO gave a major announcement focused on a renewed commitment to privacy. One of the promises was encryption across all the messaging channels it owns: Messenger, Instagram, and WhatsApp. This could re-energize interest by businesses.

The trust problem extends to Google as well. A recent story in MarketWatch called it “platform paranoia.” Authors PV Kannan and Josh Bernoff state: “It’s not only customers who don’t trust these platforms. The companies don’t trust them either. The data appetites of Facebook and Amazon are a serious impediment to companies considering these platforms for customer service. Why would a retailer set up shop on Alexa when Amazon, likely the retailer’s biggest competitor, might be eavesdropping on customer conversations?”

These troubles strengthen Apple’s hand, which is increasingly seen as the more trustworthy actor.

On October 15th, I will be giving a presentation on this topic at the TADSummit event in Chicago.

The focus will be on how Facebook, Apple, and Google are competing with each other; the ecosystem of vendors around them; and how proprietary messaging platforms compare with other text-based channels.

Hope you can make it!