The Fonolonian Experience: Our Veteran Sales VP Shares His 10 Year Journey with Fonolo 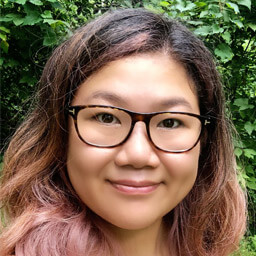 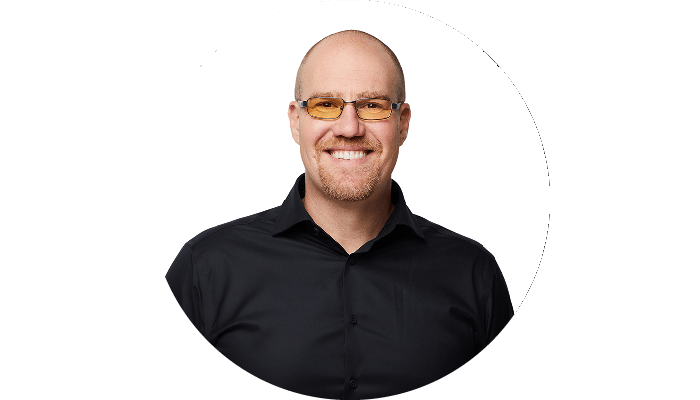 It’s rare these days for professionals to stick with the same company for more than a few years. 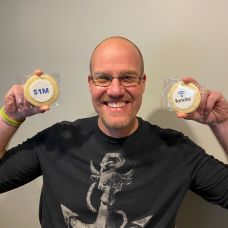 With a competitive job market, many businesses are still letting their best talent slip through their fingers. So, it’s important to take note of the ones who have managed to keep their best employees around.

Chris McLean is one such professional — he’s been with Fonolo, a small Toronto tech company, for ten years and counting! Today, he’s the VP of Strategic Accounts, and shows no signs of slowing down. We had a chat to discuss his journey with Fonolo, as well as his advice for new hires!

Chris started his career in software sales back in 2000 with a small tech business as an account developer. Over the next ten years, he worked his way up to a Senior Account Executive role with IBM after his company was acquired. While he felt fortunate to have an impressive career with a globally recognized brand, he began to feel there was something he was missing in his day-to-day work.

“I felt [the acquisition] really took all the creativeness out of our special sauce,” says Chris. “I really wanted to get back to a smaller company where we could be quick on our feet and work as an agile team.” 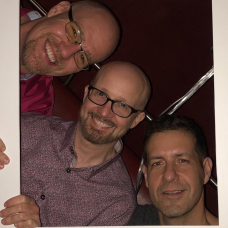 The stars aligned when Chris met with Fonolo co-founders Shai Berger and Jason Bigue, and the chemistry was immediate. At the time, the company was in its early stages and needed the guidance of an experienced and passionate sales leader. Luckily, Chris was up to the task and signed on with the team shortly after.

“They have been fantastic leaders over the last ten years,” he says, referring to the co-founders of Fonolo. “I love the fact that I’ve been able to grow with the company that we started with just four of us in a room. And now I’ve seen it grow to almost 20 people!”

As one of the early members of Fonolo, Chris has had the rare opportunity to watch its culture develop and evolve over the years.

“Fonolo, to me, is really about the people,” says Chris. “The technology is great and all… but one of the biggest drivers of why I’ve stayed for so long is because I feel like I’m hanging with my family.”

“If you’re thinking of joining Fonolo, you need to have that entrepreneurial spirit. This company will help you grow, but more than that, it expects you to grow. It’s not just a place to come and stay stagnant.” 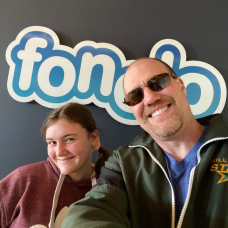 Chris and his daughter pose for a photo in front of the original Fonolo logo.

While Fonolo is made up of several departments, Chris says no one feels restrained from developing close relationships with other teams. As a member of sales, he is often pulled into strategy meetings with the marketing team or the solutions engineering team. Generally, it’s understood that having different perspectives makes for better results, and most everyone is willing to pitch in to make that happen.

“It really goes back to the ‘work hard, play hard’ mentality,” says Chris. “It’s a unique experience where these people will work as hard as they do, but they’re also able to have a connection outside of work. And I think that makes us a much stronger team.”

Even after ten years at the company, Chris has managed to maintain that spark that keeps him motivated at work. As VP of Strategic Accounts, his role has shifted to include coaching a team of five sales reps — but he’s still at his best when closing deals.

“It might not be my deal; it might not be my customer. But I’m a collaborator with the rest of the sales team, and that’s really what drives my ambition and my happiness — that I’m contributing in some way to our collective success.” 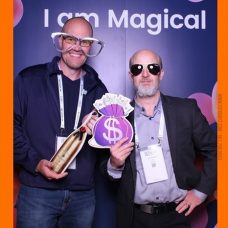 Chris and Shai (right) pose at a tradeshow photobooth with props.

“Every time we win an opportunity or deal with a customer, that’s what gets me excited,” says Chris. He often finds himself floored at the frequency at which the sales team closes deals compared to when he first started at the company, and he gets immense satisfaction from seeing the customer list grow.

“It might not be my deal; it might not be my customer. But I’m a collaborator with the rest of the sales team, and that’s really what drives my ambition and my happiness — that I’m contributing in some way to our collective success.”

Advice from a Fonolo Veteran

Fonolo had been growing consistently year over year, which is an exciting trend for Chris to see. However, he points out that the journey hasn’t been a skyrocket. Rather, it’s something that’s been built methodically and strategically, and that they’ve always been focused on the long game.

Chris has sat in on plenty of interviews during his time at Fonolo, for both sales and other department roles. He evaluates candidates based on their work ethic and desire to succeed, not just for themselves, but for the whole team. Collaborative skills and flexibility are also crucial — but most importantly, knowing when to bend and when to stand your ground.

“It’s a unique experience where these people will work as hard as they do, but they’re also able to have a connection outside of work. And I think that makes us a much stronger team.”

“If you’re thinking of joining Fonolo, you need to have that entrepreneurial spirit,” says Chris. “This company will help you grow, but more than that, it expects you to grow. It’s not just a place to come and stay stagnant.” 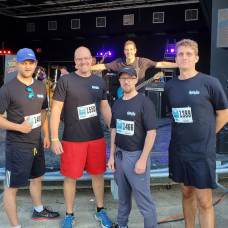 The Fonolo team poses for a photo before taking part in a marathon together.

As a salesperson, Chris has always put integrity and honesty at the forefront of his work. And it’s been possible for him to do that because he believes in the value Fonolo’s products offer. He takes a similar approach to promoting the company’s culture with new hires.

“The products we sell at Fonolo, we sell hard. But we’re not overselling it, we’re just being truthful about the value it brings. The same can be said about new hires — they can sell themselves on their experience and skills and drive, but they shouldn’t have to oversell. The most important part is that they can actually meet what they’re selling.”

Our family is growing! Click here to explore current opportunities with Fonolo.