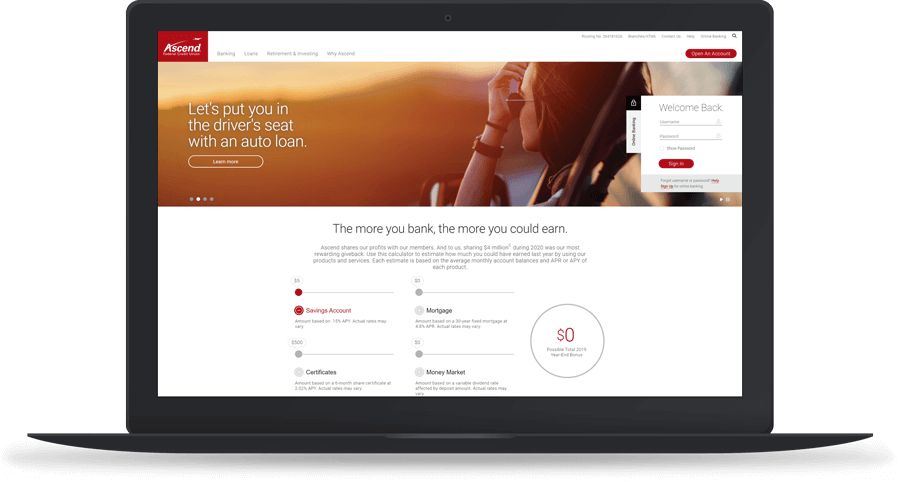 With $1.9 billion in assets, Ascend Federal Credit Union (FCU) is the largest credit union in Middle Tennessee and one of the largest federally chartered credit unions in the United States.

Ascend believes in opening new doors for financial freedom and providing an environment where members feel comfortable. With 18 branches and 30 agents, Ascend has over 157,000 members using their superior products and enjoying service excellence.

Ascend has always focused on providing an outstanding customer experience. For this reason, they diligently tracked data and feedback associated with their member journey, including queue time in the call center and customer feedback.

The results revealed that members were dissatisfied with their call center’s long hold times. Ascend quickly began to look for a way to address this issue and improve their customer experience on the voice channel.

Ascend looked into several call-back solutions to address their problem. One of the biggest issues they encountered was finding a call-back solution that would not require major changes to their existing call center infrastructure.

With Voice Call-Backs, Ascend members are offered a call-back with a simple push of a button. Then, Fonolo holds the customer’s place in line and calls them back once the next agent is available. To Ascend’s call center agents, a Fonolo call appears as a regular outbound call, so minimal training was required!

It’s critical to us that members are more than just satisfied with their experience; that they are excited. You simply can’t get this result when members are waiting on hold to be serviced.

With Fonolo, Ascend successfully decreased its call abandonment rate by a staggering 50%. What’s more, Voice Call-Backs effectively turned inbound calls into outbound calls, ultimately reducing the number of toll-free minutes used and lowering their overall cost-per-call. But most importantly, members were thrilled with the new features — a huge win for Ascend and their mission to provide an exceptional customer experience!

We were behind the curve in offering our members a call-back option. With this implementation, we feel like we are now on par with our competitors. Our members no longer have to wait on hold and can go about their daily lives, knowing that we will call them back as soon as possible.