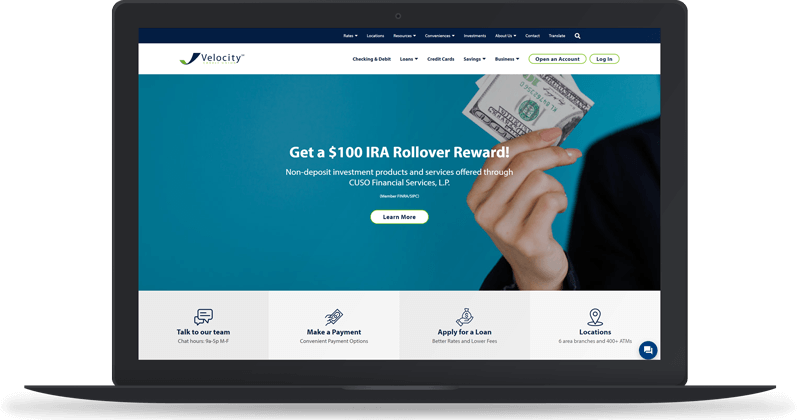 Velocity Credit Union is based in Austin, TX and has served the community since 1947. Over the past 70+ years, they have become one of Texas’ largest financial institutions. With over $840 million in assets, Velocity Credit Union provides personalized banking to more than 84,000 members across six local branches. Their philosophy is “people helping people,” and they stand proud as a socially-responsible organization.

Velocity struggled with long customer hold times and a high rate of abandoned calls, which led them to search for a new call center platform to replace its Avaya legacy system. This was a slow and expensive initiative, and as members grew increasingly frustrated with the customer experience, the credit union realized they needed to make a change quickly.

Velocity takes pride in making its members feel valued. However, their current service offering was not meeting their customer experience goals. Rather than replacing their entire call center system – which would be
costly and time-consuming – the company opted to find a solution that could solve their problems while maintaining their existing platform.

During their search, Velocity began to consider a cloud-based callback approach. This would allow them to keep their current call center infrastructure while addressing their goals. They turned to Fonolo’s Voice Call-Back solution, which gives callers the option of receiving a call-back when hold times are too long.

With Fonolo, Velocity members can simply “press 1 for a call-back” and hang up the phone. Fonolo holds their place in the queue, eliminating hold times for members and creating an improved call center experience.

With Fonolo, Velocity’s call-center abandonment rates dropped significantly by 62%, greatly alleviating member frustration. Agents reported positive feedback from members regarding the new call-back option, which led to a tremendous boost in employee morale and a decrease in attrition. Agents can now have more positive conversations with members, creating a more constructive environment in the call center.

Fonolo was able to save Velocity from a complete overhaul of its call center while significantly reducing hold time. By offering a callback option, they continue to strengthen relationships with their members and continue their legacy as a fixture in the community.

I just love how Fonolo is customizable. The messages for the call-back offer were recorded by us, and we can also make changes on the fly, such as how often or how soon we offer call-backs. It has worked out great.

Ease of implementation was amazing! How often do you learn about a new product at a conference one month, come back, propose it, go through vendor management, get approval and have it up and running three months later? That never happens.

With Fonolo, Ascend successfully decreased its call abandonment rate by a staggering 50%.