Enterprise Connect 2012 – A Week in Review

Shortly after I accepted the position at Fonolo, I was asked if I could carve out some time to attend the Enterprise Connect conference in sunny, warm Orlando, FL. I’m always up for an adventure and jumped on the opportunity. The experience would also be a crash course in the world of telecommunications and what it’s like to ‘man’ a booth with Shai and Chris …

With an early Sunday morning start, I was on my way – fully loaded with 3 banners, marketing material and the regular stuff a girl needs. I could swear the width of the banners was equivalent to my height and schlepping them through the airport was a backbreaking experience.  Aside from the screaming kids excited about Disney and some turbulence, it was a great flight. 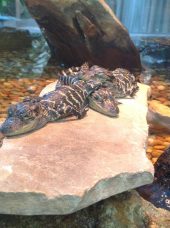 The lobby of the Gaylord Palms Resort is gorgeous but what really takes your breath away is the climate-controlled glass atriums complete with alligators, turtles, non-venomous snakes and fish (oh my!) – all securely displayed within swamp themed habitats.

After offloading my bags, I headed over to the convention facility to get the booth set up.  Errr, no AC and it was HOT. With only a few minor mishaps like a missing table & chair, a banner snapping and struggling with how to hang a sign with no ‘stuff to hang a sign with’, Fonolo’s booth was ready to go.  There was definitely a buzz in the air as companies prepped their booths for the main event.Enjoying some down time, I headed over to the verandah overlooking the pool and enjoyed a delicious smoked salmon salad and a cool bevy.

Six weeks into the job – I can’t complain!

Working poolside is awesome.  Chris and Shai arrived in the afternoon and we had a team huddle to plan out our strategy for the next few days.  We split up and met back at the booth for the booth crawl.  I was amazed at the excitement surrounding telecommunications.  Fonolo’s booth was nonstop action and we spoke to people from Japan, Latin America, people who specifically came to the conference wanting to talk to us about our call center solutions – it was incredible! Not quite comfortable with the Fonolo ‘pitch’, I fell back and listened to Chris and Shai deliver the Fonolo story with the slick new tablets in hand. 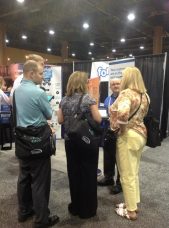 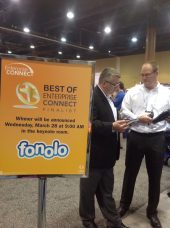 Vibing off the energy from the booth crawl, Day 2’s response was fabulous as potential clients took pictures of our banners, chatted with the team and wished us luck as finalists in the Enterprise Connect Best in Show Award.  Shai schooled me on AT&T’s previous logo and its resemblance to the Deathstar in Star Wars.  Ahhhh, I wasn’t sure what to make of this conversation but felt I should go with the flow, especially when him and Chris dug deeper into the topic with very detailed references.  I don’t think my childhood hairstyles inspired by Princess Leia held much weight. That was my cue to seek out beer. As we closed off day 2 and after my ignorance on the Deathstar thingy, Shai was looking a little tense but after one beer, he was full of smiles and found his second wind.  So much so, he lead the team away from high-energy outdoor cocktail party and over to the refined HP affair with the magician and fortuneteller.  Party animal. 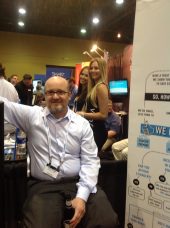 Amazing how fast time flies. We kicked off the final day on an even higher note! Fonolo WON the Enterprise Connect Best in Show Award.  Sitting amongst hundreds of delegates in the main Keynote conference room, Chris and I breathed a sigh of relief and feverishly sent out emails and Tweets about Fonolo’s win.   (Check out the press release on PR Newsire.) I was proud and elated, Chris was smiling from ear to ear and Shai looked so happy as he accepted the award on stage.  Big thanks to Eric Krapf, Enterprise Connect Co-Chair and the panel of judges who recognized Fonolo’s innovative technological advancements in the industry.  Huge win – we’re stoked. Twitter was buzzing with the exciting news and we were able to breathe easy until …

… Chris lost his passport and was forced to go to the Canadian Consulate in Miami – schlepping those backbreaking banners as punishment.

… Shai missed his flight, was harassed by Homeland Security who suggested he have a drink in the lounge but instead, in a flurry for seat assignment, took a wrong turn, ended up in arrivals and had to go through security (again) – almost missing the flight (again).

… and me? I survived my first telecommunications conference, successfully delivered the Fonolo pitch to delegates, can identify the Star Wars Deathstar and made it home safe and sound.

I think it was worth the hard work. 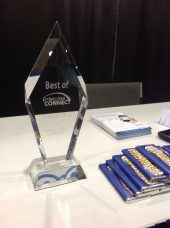 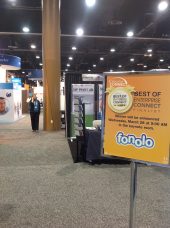 Stay tuned for next week’s update as Fonolo kicks off a new fiscal year and I embark on … ‘The Rebranding Challenge’. Should be fun!