Most people don’t realize the impressive scale of the contact center industry. Collectively, we spent 190 billion minutes calling a company for help. On the other side of those calls were 3.6 million people working as agents (and those numbers are just for the US).

Companies spend roughly $22 billion on the technology enabling all of these interactions, and with the market undergoing a massive change in the last decade, that number will continue to grow. The idea of the call center as a cloud-based service has switched from being impractical, to now almost inevitable.

How Far Along Are We?

If you listen to the vendors of cloud call centers, and the general chatter in the industry, you might get the feeling that everyone has switched to the cloud, except for a few laggards. For example, one report claims an impressive 24% compound annual growth rate, projecting an increase from $5.43 billion in 2016 to $15.67 billion by 2021. Another report predicts 18% CAGR out to 2022 (see image below, but note the odd horizontal axis). 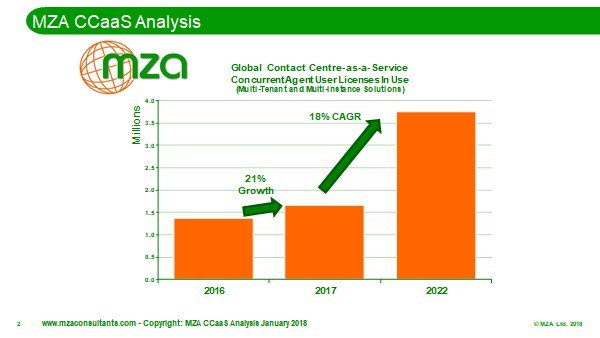 So the growth is impressive, but when you look at the whole picture, you can see that cloud remains the minority of call center deployments out there. Some reports say 95% of all agent seats are still premise-based. In a recent interview, Avaya CEO, Jim Chirico speculated that the cloud-conversion is about 10% done.

The number is low partly because of the long replacement cycles for existing call centers, but even new deployments are not all cloud. In May, Genesys said, “While on-premises deployments continue to represent the majority of [our] business, more than half of the 700 new customers (roughly 400), including notable brands such as Coca-Cola, selected a cloud model.” Doing the math… 300 of the 700 new deployments were for on-premise equipment, so there’s still life left for on-premise call centers.

Another reason companies hesitate to switch their call center to the cloud is the sunk cost they have in their existing equipment. If the call center is functioning well, and the purchase price was long-ago amortized, it’s hard to justify the new spending. Cisco has many clients in this situation, which they’re trying to address in a new program.

Beyond financial factors, companies may be reluctant for other reasons to move their call center away from the tried-and-true premise-based equipment model. Even as more and more parts of the enterprise software were being converted to cloud, the call center has always lagged.

We Know the Direction, But Not the Pace

No one doubts that cloud deployments are going to grow. The big question is whether the current pace will continue so that we end up with an all-cloud world, or if it will plateau and reach a steady-state with some percentage of call centers remaining on-premise indefinitely.