Here’s a simple question: Are contact centers handling more or fewer calls compared to one year ago? How about five years ago?

It seems reasonable to expect that the rise of non-voice channels (self-service, email, chat, social media, etc.) would lead to a decrease in plain old phone calls. Thus the prevailing philosophy is that companies should focus more effort on the new channels, and less on voice. Respected industry analysis firm Dimension Data went so far as to declare a “growing irrelevance of the telephony-centric model” in its latest report.

But the data is actually not conclusive. How can we reconcile that with the philosophy above?

Are New Channels Crowding Out Voice?

Dimension Data’s highly regarded Global Contact Center Benchmark report is unique because they’ve asked the same questions, with the same methodology, since 1997 yielding a unique view into the evolution of customer service. Their most recent report shows 35% of all interactions are now on “digital” (i.e. non-voice) channels. They further predict “digital interactions will overtake voice by the end of 2016”. See the nested pie chart below.

It was this report that prompted some to start talking about “Voice Shrinkage”, as in this conversation with analyst Sheila McGee-Smith and industry executive Joe Manuele.

However, we should be careful when interpreting the data. First, if you’re counting “interactions”, how does one define an interaction? Does each email count as one? Each phone call? In a single phone call, you might be able to resolve multiple issues, whereas several emails may be required to solve a single issue.

Second, a proportional pie chart can be misleading. Let’s say a company started responding to tweets this year and they count 500 interactions. The pie chart will show relative “shrinkage” of voice but, those new tweets may not have displaced a single phone call.

Unfortunately, we don’t have direct data on how many calls are received by call centers. Each company knows how many calls it handled itself, but no one is sharing this information in a central place. (If I’m wrong and anyone has this kind of data, please let me know in the comments!)

In its 2015 report, ContactBabel surveyed 212 call centers and asked, “How do you think inbound channels will change in your contact center in the next 12 months?” When it came to live agent telephone service, 40% said “no major change”, 19% said “somewhat increase” and 29% said, “somewhat decrease”. (See image below.) Looking at it another way, about 90% of respondents picked the “none” or “somewhat” options. I wouldn’t place any bets based on such ambivalent results. 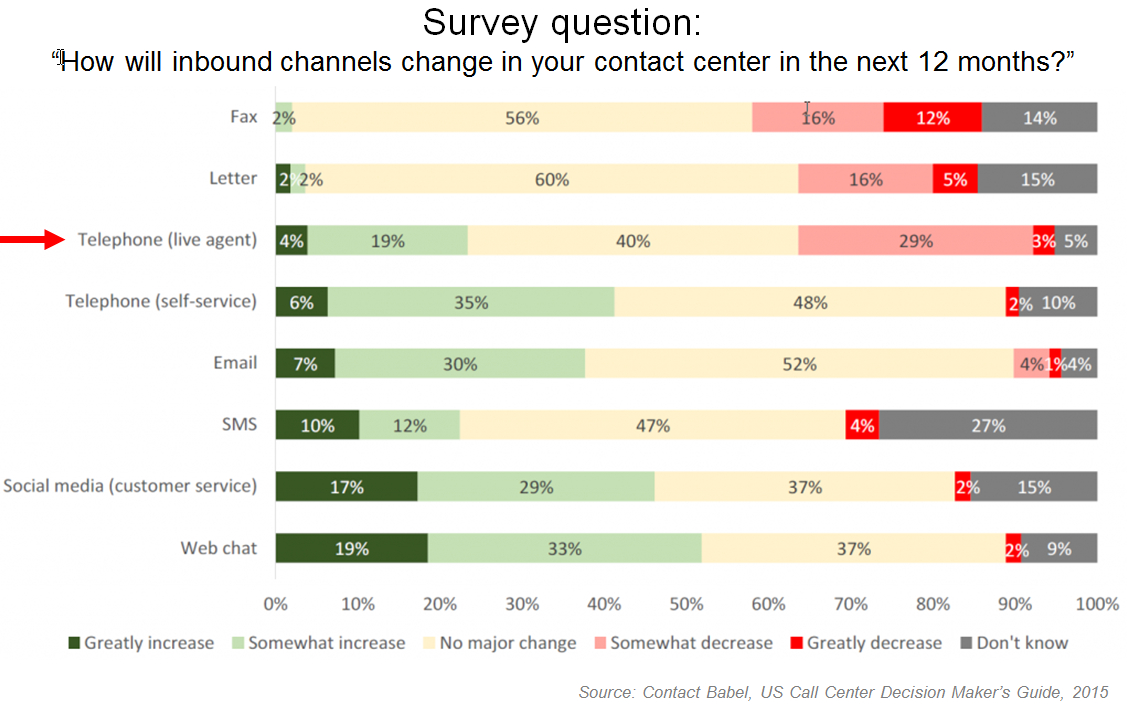 Dimension Data’s survey asked more call centers (901) and asked about a 2 year timeline rather than one. Their results were more pro-shrinkage: 42% of call centers expect a decrease in 2 years. However, they don’t say by how much, and they don’t report what the other 58% said. (That info is probably in the main report, but I only had access to the summary. Hey DiData folks – if you want to send me a copy I’d be very appreciative.) [Update: Thanks DiData!]

Fewer Calls, But More Important Ones

Both of the surveys omit something very important: call duration. That’s crucial because looking at duration is how we can see what’s really happening with the voice channel.

As self-serve options got more effective (and more popular), easy interactions like confirming a reservation or tracking a package got stripped away from the call center. The interactions that remained were the tougher ones. As analyst Matt Dyer wrote, in response to the thread above:

As other channels peel away the easier interactions, the calls that do end up in the call center are more complex and contentious. Naturally, this leads to a longer average call duration.

What Exactly Do We Mean by Shrinkage?

It may be true that the quantity of phone calls is decreasing. But, if call duration is increasing (driven by higher complexity), then the point may be moot. Well, it’s moot in the only two ways that are meaningful:

1. Cost: The biggest cost for call centers is the staff. Fewer but longer calls may mean the same, or even a higher number of agents are needed. It’s the total amount of call handle time that matters. What about telecom costs? Here too, duration matters as much as quantity, since many services are billed on a per-minute basis.

2. Customer Satisfaction: All numbers aside, the voice channel holds a special place as the “ultimate escalation”. It’s the channel that takes all interactions that can’t be handled otherwise. It’s these challenging interactions that become make-or-break moments for a company’s brand.

The Number of People Working as Agents is Increasing

So where does that leave us? If we really want to assess what’s happening with the voice channel, we need both total calls and duration, yet we can’t get real global data on either. There’s another way: If call volumes were decreasing, we’d expect there to be fewer agents employed, right?

Fortunately, this is a number we CAN get, from the Bureau of Labor Statistics. Looking at the numbers for the occupation “Customer Service Representatives” over the last 5 years shows a steady increase. The number of people holding that title is up 17% over the past 5 years and 27% over the last 15. 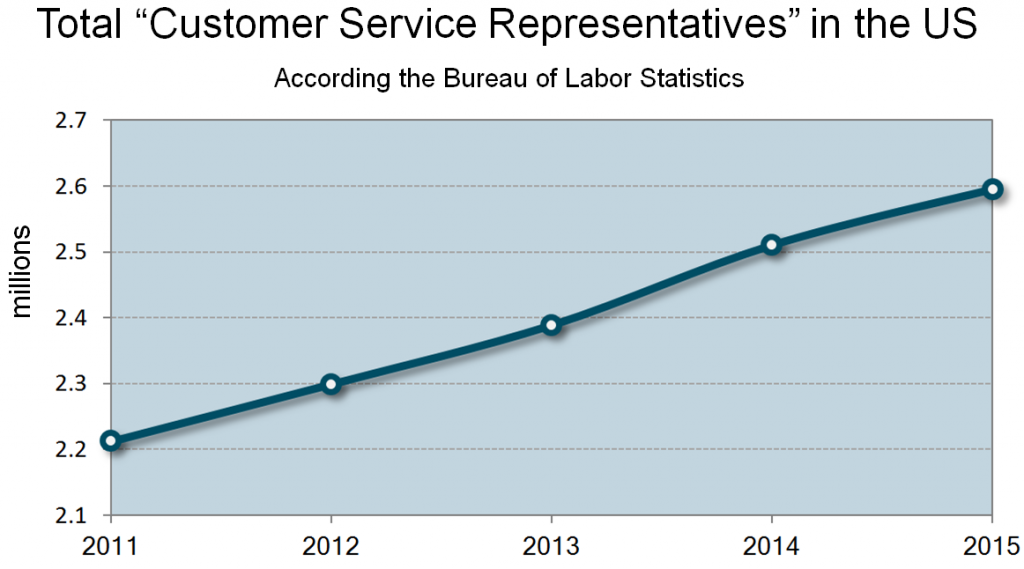 Please see some caveats on this below.*

As an aside, we see a similar trend in the UK. 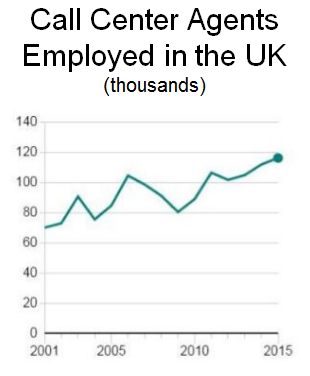 So How Do We Square the Circle?

How do we reconcile the increase in agent employment with the (supposed) decrease in call volume? One answer is the call duration issue, as I discussed above. Another answer: Maybe there are just more interactions overall. The Dimension Data survey says that 74% of call centers expect overall interactions to increase over two years. This makes sense if you consider that more and more commerce is shifting online and away from physical stores.

Maybe what’s happening is that self-serve tools are making consumers more efficient (i.e. fewer interactions needed per person), BUT the migration away from physical stores/bank branches/government offices balances this out so that the total need for agents is still growing.

One thing is undeniable: there has been a massive shift in how businesses communicate with consumers. That shift is still continuing today, creating an enormous challenge for companies that want to meet the tough and fluid expectations of their customers.

* Caveats on the BLS Numbers

This is admittedly a quick-and-dirty analysis. If someone has better numbers or has done a more thorough job, please let me know and I’ll amend the post. Some obvious caveats:

2) This data only covers US employment and so excludes the important interaction with offshore call centers. I’ve read that many positions have been “repatriated” in recent years. If that’s the case, then maybe that accounts for the increase in US positions and TOTAL call center agents have actually gone down.

3) I’m not sure how the BLS handles part-time or contract workers, and many call center jobs fall under those categories.

4) Some of the people in this category might actually be chat agents, rather than phone agents. So perhaps there has been a decrease in agents working purely on the phone, but it’s obscured by agents hired to work the new channels.

5) One should look at these numbers in the context of the overall economy. Unemployment declined steadily over the 5 years shown in the graph, so maybe that accounts for all the growth in agents. But this is way deeper than I want to get … I do have a day job at Fonolo, you know.