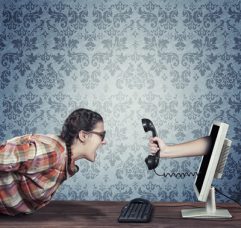 is a community-driven platform that aims to end hold time for customers. The website tracks companies who are experiencing the most complaints on Twitter from people waiting on hold. It’s our way of recognizing which businesses need to improve their call center hold times, and could benefit from a call-back solution like Fonolo’s. But the most interesting part of onholdwith.com are the tweets themselves.

By the time someone has taken to social media to unleash their innermost hold-time frustrations, the result can be truly eye-opening, and sometimes pretty darn hilarious. I mean, if you’re waiting on hold for 4 hours, you have to find humor in hearing, “Your call is important to us, please hold,” for the 89th time, right?

We’ve looked at the top 10 hold time offenders this month, and scoured their Twitter complaints to compile some of the most cringe-worthy responses to waiting on hold.

When sarcasm is your only way to stay sane…

Wonderful people at @BTCare just called, kept me on hold for 40 minutes and STILL failed to grasp the issue.

I’ve been on hold with Sprint customer service for five and a half years.

When the problem IS the solution…

@ATTCares while on hold with ATT they constantly tell me how easy it is to get answers via their website. great, it my internet was working!

When the hold music becomes a method of torture…

@VodafoneUK You have four songs for your hold music. Unsurprisingly that gets INCREDIBLY repetitive when I’m sat on hold for 25 minutes!

.@DIRECTV keeps me on hold for 25 minutes then hangs up on me. You would think the $4K a year I pay them would at least warrant a callback.

When “a Michael” shows you no love…

Just spent 15 minutes on hold for a Michael to hang up on me, so id appreciate it if i could do it over live chat?

Are you having a laugh?? Been on hold for 50 minutes and now you tell me it closed at 8? I was transferred by another department? pic.twitter.com/vZEPlTgNH0

When your wait time is eclipsing your entire day…

I think I’m going to be on hold with Telus for the entirety of this solar eclipse. This tweet marks 40 minutes on hold.

When hold times are so long you apply for a job, get it, go through training, and fix the issue yourself before someone picks up the phone…

I got a job at Comcast and completed training so I could fix my own cable because it was faster than being on hold with customer service.

When you could have done something “better” with your time…

Cooked and burned the roof of my mouth on 14.85 hot pockets

Hungry for more? Read our annual list of the Top 10 Worst Companies to Call here.