Chatbots Won’t Save Us from IVR Hell

The IVR experience (“press 1 for this… press 2 for that…”) has long been part of the contact center. Although it serves an important purpose, it is universally detested. Many people see chatbots as a natural replacement for the core functions of the IVR.

Sorry, but I’m afraid this is going to be one of those “rain on the parade” posts. First, it’s not clear when or to what extent that will happen. Second, most of the aspects of IVRs that make them hated are likely to translate directly to chatbot form.

A recent study by “The Conversation” sheds light on just much IVRs are disliked. They sampled roughly 1300 people, demographically matched to the US population and conclude:

“Individuals still overwhelmingly want to deal with a human being rather than a machine. If it doesn’t work easily for them, people do what it takes – within what the system permits – to circumvent automated customer service.”

I assume by “do what it takes” they mean hitting the zero button over and over or yelling “agent”. Another popular work-around is the site gethuman.com which claims to show IVR shortcuts to reach an agent.

The attitude towards IVRs from respondents was predictably negative: “Only 10% were satisfied with their experience and approximately 35% found the systems difficult to use. Just 3% actually liked [them].”

Why Use IVRs In the First Place?

These jobs, in themselves, are beneficial to both sides. While many callers complain about being forced to interact with “a machine”, that’s still much better than getting to the wrong kind of agent and then being transferred. Getting authentication out of the way before the agent conversation saves time for both parties. What many prognosticators miss when discussing an idyllic future of customer service is that these jobs are not going away.

Chatbots to the Rescue?

The allure of chatbots is that they will do those 4 jobs without frustrating the customer, and at low cost. The problem is that early chatbot deployments seem to fall into the same traps as IVR deployments.

You can read lots of coverage in the tech press touting chatbots as replacements for agents. This is baloney writing; the result of vendors overselling and journalists being lazy. I tackle the flaws in the replacement argument here. In this post, I’m just talking about the modest and achievable goal of using chatbots as a better pathway to reach a live agent. Even with that narrow scope, I’m seeing a troubling pattern…

Take a look at Lufthansa chatbot “Mildred”, which helps you search for fares: 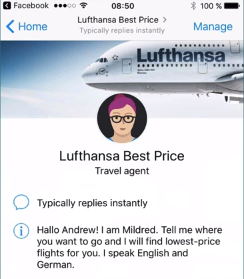 You can follow along a sample transaction in this great video (start at 4:20) by Andrew Maher. He gets a flight suggestion from the bot, but then his obvious follow-up questions are dead-ends.

“Can I order a special meal?”

Then the final violation:

“Is there a real person to chat with?” 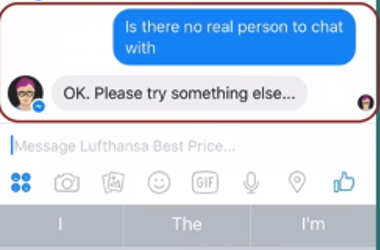 The flaw here is that the chatbot gives the impression that it can handle standard questions about airfare, but then the user discovers that either those questions can’t be handled, or the phrasing needed is so specific that he will never be able to guess it.

Let’s go back to that study about IVRs for a moment. 69% said they “agree” or “strongly agree” that IVRs make it hard to describe the problem that they’re calling about. Sound familiar?

Quoting again from The Conversation: people were frustrated with the system’s “… (in)ability to understand them and the need to repeat the same information … People still just want to get to a live agent…. they reported fear about not understanding the prompts or pressing the wrong button, anger and frustration when the IVRs do not lead them to the right place, and an overwhelming sense of stress in general.”

If we don’t learn the lessons from studies like these, we are doomed to repeat the mistakes when we try to replace IVRs with chatbots.

People Know How to Self-Serve. They Call Because They Can’t.

The industry often bemoans the high cost of calls. Perhaps this is the wrong way to look at it. Maybe it’s precisely because agent calls are expensive that customers on the other side of the equation are able to trust the outcome. People know that agent time costs money, so they assume that agents will be equipped and empowered to solve problems.

Here’s one final quote from the survey:  “Respondents told us they’re confident a real person will ‘see it through’ and they feel more assured that ‘the call won’t just end’ without some sort of resolution.”

So the message to companies looking to lower their support costs: Sure, you should invest aggressively and continuously in self-serve tools. If you think you can deliver a better self-serve experience via a chatbot, by all means try it. But if self-serve fails, don’t try to hide the agent from customer. There should be a frictionless path to that conversation. (A job done very well with call-backs, by the way.)

There’s an old saying regarding taxes: “Avoiding is fine. Evading gets you in trouble.” It’s the same with customer service phone calls.